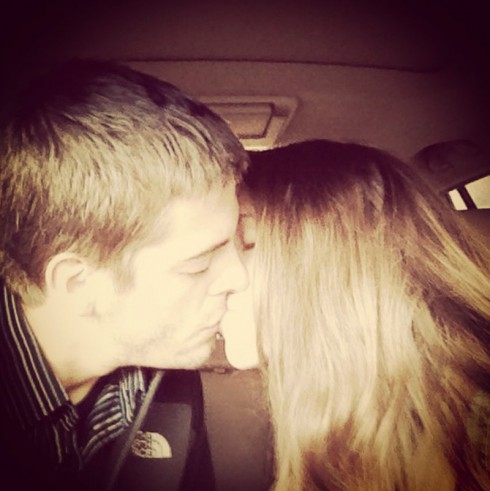 Well, most of us saw this coming: Following sister Jessa Seewald and her parents’ cue, Jill Dillard participated in her own “happily married” kissing picture with husband Derick Dillard.

"He who finds a wife finds a good thing and obtains favor from The Lord." Proverbs 18:22

“We’re really excited, so we wanted to share that with y’all as well,” Derick said while holding up ultrasound pictures. The proud parents then went through the pictures and pointed out where you can see the baby’s foot, his profile and how you can tell he’s a boy.

“Yeah, I had to give him a little squeeze, but then he kicked back,” Derick said. “That’s really exciting.”

During a recent interview with Focus on the Family, Jill said she’s preparing to be a mom by trying to be healthy for the baby and doing devotions. Derick said he’s doing whatever he can to feel equipped — especially because he’s never changed a diaper — and is working on being the best “spiritual leader” for the family.

The pair also talked about some of the less-than-encouraging things they’ve heard about marriage and parenthood. Derick explained, “People were saying, ‘Oh, well, you just wait. You’ll get through this honeymoon phase.”

Jill added, “We’re like, ‘What is that supposed to mean?’ … I think that when people figure out you’re expecting a lot of times, they see a belly and their like, ‘Now I have a right to share every horrible story that I can think of.'”