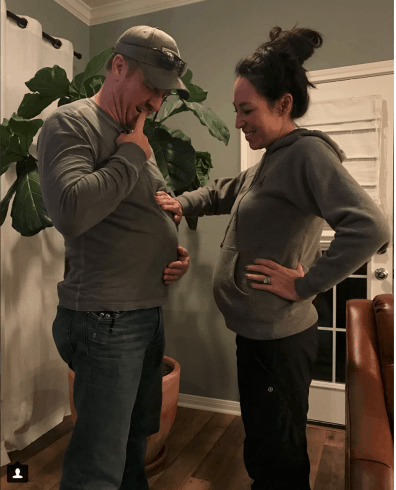 The gender of Chip and Joanna Gaines’ fifth child has been revealed! The happy father announced what he and Joanna are having via Twitter in his usual goofy way.

In a post-Fixer Uppertweet, Chip shared the gender reveal with a new friend, one he met through @tebowfoundation. “Alright, alright,” Chip began. “If we’re going to announce the gender of our #5th child. It might as well come from my new friend #Gage! Take it away my man.”

#Gage was so thrilled to get to meet you! Thank you for making his day! pic.twitter.com/qUx04kEKz3

In the clip, Chip explains that he’s about to have become a father for the fifth time — but he’s a little short on names. “I can’t think of a D name,” Chip tells Gage. “Can you help me think of a D-name?” In addition to seeming delighted to have this insider info, Gage quickly deduces that Joanna and Chip are having a baby boy. After all, they’ve given both their boys D names (Drake and Duke), and both their girls E names (Ella and Emmie).

When Gage exclaims “A boy!”, Chip responds: “A boy! Is that a secret? I don’t know-that might not even be allowed on Twitter. You better keep that to yourself, dude!”

“I need a D-name,” Chip goes on, “and so far all I can come up with is Dragon. And [Joanna’s] like, ‘You are not calling that baby Dragon!'”

Apparently, Chip’s gender speculating instincts are second-to-none. Two months ago, Joanna posted an Instagram of her sonogram and included in the caption that Chip was already speculating that it was a boy:

Chip swears he can already tell it’s a boy. Look at the little heartbeat!! ??❤️❤️ #5

But the couple is still keeping a tight grip on their pregnancy narrative. Today, Joanna posted a gorgeous flower-transfer turtorial on her blog, but made no mention of the exciting news.