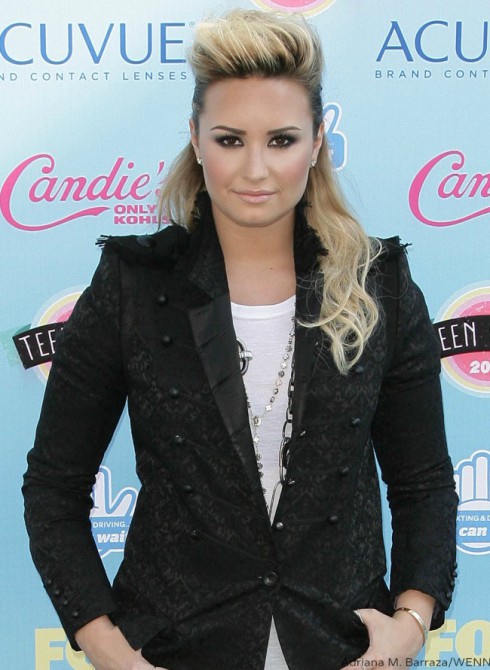 Demi Lovato is undeniably mature for her years. She’s been through a lot and really seemed to learn from her experiences with eating disorders, depression and self-harm… But, she is just 21 years old (as of last week) and mistakes do happen.

Radar Online broke the news last week when they were approached by a seller who claimed to have 20+ topless photos of the former Disney star. Radar opted not to purchase the photos as they were unable to authenticate them, but they said the compromising photos showed a woman with identical tattoos to Demi.

Celebslam, however, did publish the photos. True to the seller’s claims, the photos are pretty explicit. They also include some woman-on-woman shots.

“The girl in the middle row, last pic is our friend and is a girl Demi had a fling with for some time on and off,” the seller told Celebuzz. “After Demi got with Wilmer our friend called it off because she didn’t like being played, she sent me these pictures that Demi sent her as a joke and I have no use for them… There are about 20 total, not all have indication they are of her except some have her tattoos in ones you cannot see the face.”

If the photos are indeed of Demi, she can take solace in the fact she’s not the first Disney star to have a nude picture scandal: Vanessa Hudgens, Selena Gomez and Miley Cyrus were all victims to topless photo leaks or threatened leaks.

“That was just a really sh**ty situation that sucked,” Vanessa told Paper Magazine in February. “That was by far the worst moment of my career.”

As difficult as it was, the photos may have helped Vanessa bridge the gap between Disney stardom and adult acting roles. If the new photos are of Demi, hopefully she can take something as valuable from the situation.