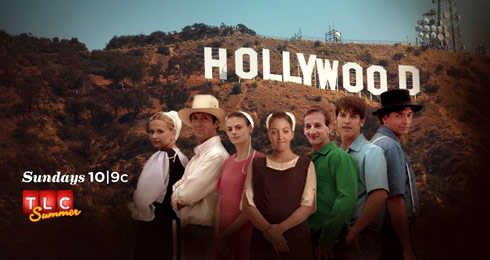 It seems TLC has captured lightning in a bottle once again with their west coast installment of Breaking Amish as the seven fun-to-watch guys and gals of Breaking Amish: L.A. are averaging 1.8 million viewers a week. The show’s popularity has not gone unnoticed by the network as it was announced earlier today that TLC has added an extra hour-long episode as well as a “Breaking Amish: L.A. — The Shunning Truth” reunion special!

Originally announced as a ten-episode series, there will now be an eleventh episode followed by the hour-long reunion hosted by Michelle Beadle, who also hosted the hugely successful reunion specials for the original Breaking Amish series. The two added hours will air back-to-back on Sunday, September 29 at 9/8c on TLC.

At this point it is unclear what the extra non-reunion episode will contain. My guess is that the savvy peeps at TLC and Hot Snakes Media (who also produced the original Breaking Amish) had a contingency plan if the show was really successful with alternate editing for the remaining episodes that includes enough extra footage to stretch the show out for another hour.

Either way, I’m once again hooked and I’m excited to hear about the extra episode and the reunion special! Catch all new episodes of Breaking Amish: L.A. on TLC Sunday nights at 10/9c!

TLC today announced that it has ordered two additional episodes of BREAKING AMISH: LA. The series, which has been averaging 1.8 million P2+ viewers during its season, follows seven young Amish and Mennonite men and women who are living together in Los Angeles and exploring life among the “English,” forcing them to contemplate whether or not to embrace this new world or return to the life they left behind. This new order brings the series total to 11 episodes, with an additional reunion special, BREAKING AMISH: LA – THE SHUNNING TRUTH.

Both hour-long episodes will air back-to-back on Sunday, September 29 starting at 9/8c, and serve as the season finale.

BREAKING AMISH: LA – THE SHUNNING TRUTH, hosted by NBC’s Michelle Beadle reunites the group to catch up on life together during Los Angeles, and what’s happened back at home since the series starting airing. Covering all of the drama that was exposed during the season, the reunion will tackle the conflict and rumors, sensitive relationship questions, and ultimately will try to get to the bottom of any unresolved issues. TLC invites fans to submit their burning questions at Facebook.com/BreakingAmish, and they may be used on the show.

BREAKING AMISH: LA continues this Sunday, September 1 at 10/9c on TLC, with the episode titled “Judgment Day.” In this episode, Devon returns home to an unwelcome reception, and when Iva’s fiancé Sam leaves to return home, simmering tensions boil over. Everyone disperses to cool off and Matt starts a promising internship with a prominent fashion designer. A surprise baby shower for Lizzie turns sour from Devon’s actions and the rest of the group decides that enough is enough.

LINKS All The Bachelor finalists ever, lesbian Xena, new most-followed person on Instagram…