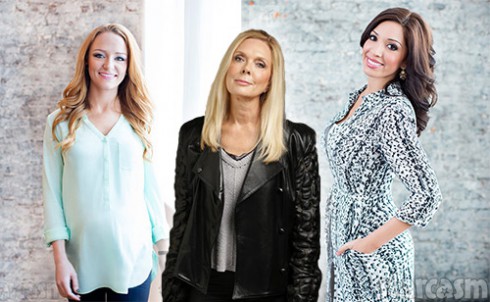 Teen Mom‘s Farrah Abraham usually has no problem defending herself. But, in one of the rare times Farrah isn’t taking swings at her critics, mom Debra Danielsen instead is doing the dirty work.

It’s no secret that Farrah’s Teen Mom co-stars weren’t thrilled about her participation in the MTV reboot. When Maci Bookout first heard the news, she even threatened to quit filming. After she had some time to calm down, Maci did a good job of explaining she was just concerned about the juxtaposition of Farrah’s storyline with that of Maci’s Kindergarten-age son, Bentley. Still, she added her issues didn’t have anything to do with Farrah personally.

“I don’t hold a grudge against her, I’m not mad at her,” Maci said two weeks ago. “I don’t judge her — nothing like that.”

Even though Maci specifically said she wasn’t judging Farrah, Debra Danielsen apparently was insulted on her daughter’s behalf… Causing her to take to Twitter in Fararh’s defense. (Although the account isn’t official, it is followed by Farrah and seems to be authentic.)

Did you all hear Maci Bookout insult my daughter Farrah! Maci put your self righteous, judgemental attitude away. It does harm to others

What’s interesting is that Farrah hasn’t started her own (public) fight with Maci. In fact, besides a little diss of her fellow Teen Mom authors, she’s been remarkably drama-free lately. It’s also amusing to note that Debra lobbed similar insults at Farrah in a recent clip after Farrah said Debra was acting like “a hillbilly out of control.”