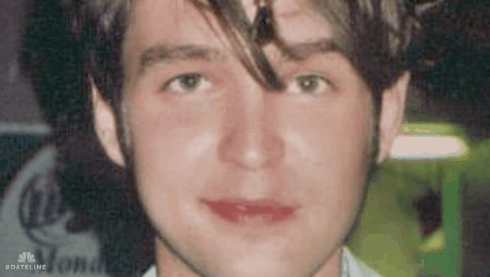 Tonight’s episode of Dateline, “Before Daylight,” details the 2004 slaying of 23-year-old Jesse Valencia by his married cop boyfriend. The motive? Jesse was threatening to expose their relationship and Rios didn’t want to be “outed.”

Jesse was a well-liked University of Missouri student when his life was cut short by Steven Rios, who was 27-years-old and had a child with his wife. Rios met Valencia when he broke up a college party Valencia was attending. The younger man was arrested because he asked the officers for probable cause.

Officer Rios asked Valencia personal questions and showed up at his residence after he was released, telling the young man that he had more questions for him. Those questions led to a hookup that turned into an affair.

Because of their multiple hookups, Valencia assumed the case against him would be dropped. When it wasn’t, he got angry. His mother Linda Valencia says Jesse planned to tell the other police officers about his affair with Rios to get revenge for not having his case dropped.

Valencia never got the chance to out his relationship with Rios. He was found with his throat slip near the University of Missouri campus.

Valencia wasn’t the only college student Rios was having sex with. Andrew Schermerhorn, who was also casually seeing Jesse Valencia, came forward with the allegation that the three of them had hooked up together weeks before Valencia’s murder.

Schermerhorn and other friends of Valencia told the police what they knew about Valencia’s relationship with Rios. When he was interviewed by his colleagues, Rios at first denied the affair. Eventually he confessed to having a sexual relationship with Valencia, but not to his murder.


Rios purchased a shotgun and threatened suicide after the interview. He admitted to Capt. Schwartze that he “had done a bad thing.” He was placed in a mental health facility, where he escaped. It was during his final hold in a mental health ward that forensic information came back tying him to the murder.

Why hasn’t Bill Cosby been charged with a crime?