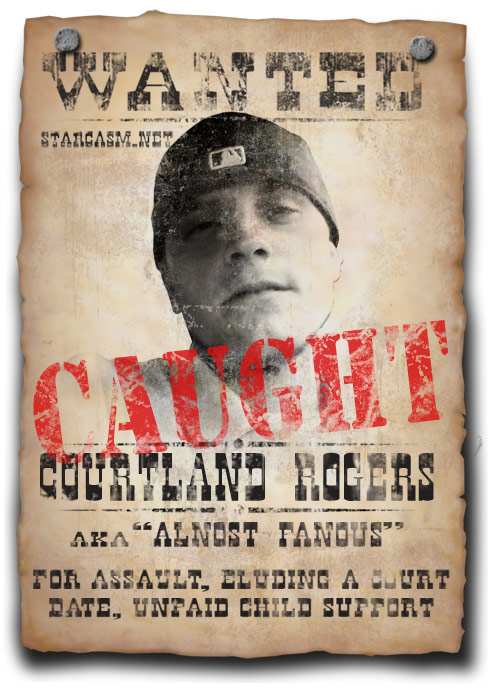 It appears Courtland Rogers’ two-week long multi-state police-eluding tour of America is over. The 27-year-old estranged husband of Teen Mom 2 star Jenelle Evans tweeted yesterday, “they.got me…brunswick.coybty jail i am.on my way…write me …sorry i got caught,” and a Brunswick County Sheriff spokesman confirmed earlier today that he is in custody for assault on a female.

“Looks like he has indeed been taken into custody as of today and it looks like the charges are one count assault on a female,” Brunswick County Sheriff’s spokesperson Emily Flax confirmed to Wetpaint. Flax reveals Courtland was booked at 11:34AM on March 6.

We assume the assault on a female charge is one of the four filed by Jenelle on January 23. Courtland failed to appear in court to face the charges on February 18 and has since been “on the run” (sort of) and tweeting the entire time. If we are to believe his first hand accounts, he traveled through more than eleven states including Ohio, Alabama, and Florida and even took some time to brush up on his surfing.

UPDATE – Click here to see Courtland Rogers’ new mug shot as well as a photo fo the arrest warrant with graphic details about his alleged assault on Jenelle!

Meanwhile, prior to Courtland being taken into custody and prior to Jenelle reentering rehab, it appears as though Courtland may have been shopping a sex tape around — or something similarly explosive. In a screen capped text message conversation between Jenelle and a friend tweeted by @JenelleBombs she allegedly wrote, “Remember what I told yu he had of me.. ? well now hes been talking to people trying to sell it :(” That was followed by, “Yu have no idea how bad this is gonna be we did this back when I was out of control Im so hurt dude.”