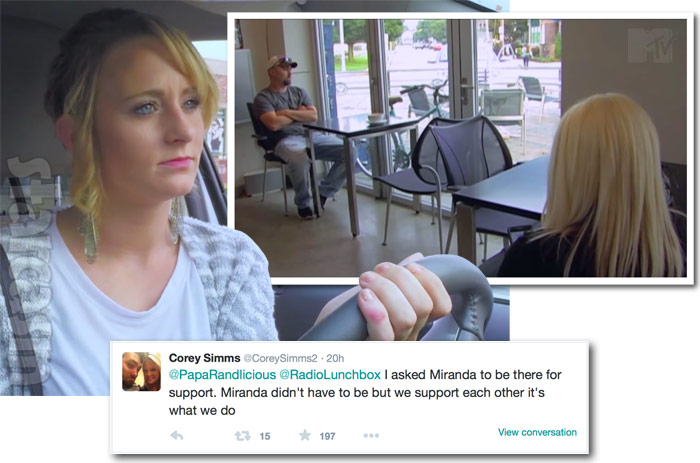 Teen Mom 2 dad Corey Simms is usually pretty quiet on social media, but he took to Twitter recently to address a scene from the season finale in which Leah Messer refused to meet with him because his wife Miranda was present.

To set things up, here is a clip that has most of the scene in question:

What you don’t see in the clip above is that Leah does eventually leave without meeting with Corey, but not before texting him and explaining that she only wanted it to be him and her present, and that she felt uncomfortable with Miranda there. Corey and Miranda seemed shocked and frustrated by Leah’s stance. “I don’t understand,” Miranda tells Corey. “As much as I do for her kids and I get treated like this.”

The scene stirred quite the debate among fans of the show, with some supporting Leah, and others arguing that Miranda had every right to be present during the discussion. Even Chelsea Houska’s dad Dr. Randy Houska put in his two cents. After @RadioLunchbox tweeted “Corey’s wife Miranda sitting one table away….go sit in the car. Let Corey and Leah talk,” Randy retweeted the statement and added “agreed.”

Corey then responded to Randy and Lunchbox:

@PapaRandlicious @RadioLunchbox I asked Miranda to be there for support. Miranda didn’t have to be but we support each other it’s what we do

Other commenters got involved and Corey laughed off the negativity:

TWEETER: no it’s called she needs to mind her business it’s not her kids. It’s okay for her to wait in the car. That’s some kid sh!t

TWEETER: ALL MIRANDA DOES IS ATTACK LEAH AND U GUYS GANG UP ON HER!

COREY: yeah your so right. That’s all we ever do shame on us!

TWEETER: I’m so glad you stood by your wife!! What did Leah honestly have to say that she couldn’t say in front of Miranda!!

Miranda also responded to the scene on Twitter, but she says she didn’t even want to be there in the first place! “I was ASKED to go to the meeting and asked to sit at a different table for filming,” she tweeted. “You really think I wanted to be there? No.”

Someone responded by writing, “you didn’t HAVE to say yes.” Miranda then tweeted, “I support my husband!”

Meanwhile, after the episode aired, MTV posted a bonus clip with footage shot after the scene in which Leah defends bailing on the meeting:

“I had asked Corey if he would, you know, if we could sit down and talk, the two of us, about the girls, and getting things on a more positive level — a healthier communication between the two of us,” Leah explains to her sister Victoria in the clip. “But, this one time, I just wanted it to be Corey and I — the parents of Ali and Aleeah — and us get on good terms. We can’t add everybody else to the mix until we’re at a good place, you know?”

Victoria concurs and Leah continues: “We were meeting at a coffee shop and he brought Miranda. I was just really upset with the fact that it couldn’t be just him and I. Just to see her through the window, it made me feel angry. There has to be a time that I stand up for the way I feel and say, ‘You know what? I’m not OK with that. Like, these are our children, we need to have a conversation about our children, just you and I.'”

Victoria agrees again and says of Miranda, “She should be secure enough to know that no matter what conversations you and Corey have — just you two — that he’s going to come back and talk to her about it.”

“There’s been many times Corey has asked for just him and I to talk,” Leah points out, “and I was respectful of that because I know that we are Ali and Aleeah’s parents. And he needs to respect me in the same way that I respect him.” 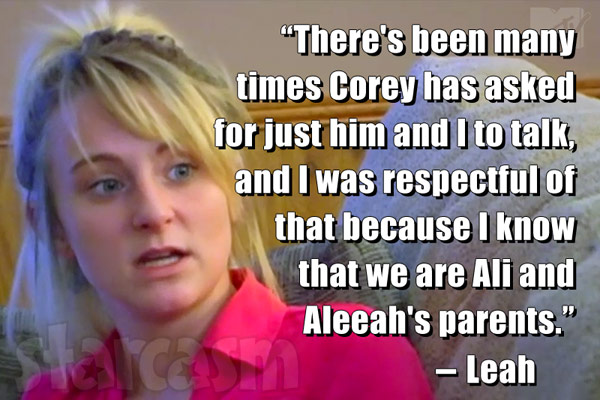 Then Leah explains the additional factors that figured into her decision to not go through with the meeting. “I was already sick to my stomach, I was already a nervous wreck because I wanted things to go so well. And what I learned in therapy is that when a situation arises like that, it’s best to leave. But, I’ve never expressed my feelings the way that I am now. You know I continue to go to my therapy, I continue to try to handle things the best way I possibly can. At the end of the day, I can’t control his feelings or his actions — I can only control my own.”

Another important factor in this debate is the report that Corey and Leah hooked up in the back of his pickup truck after Corey and Miranda were together — a report that is backed up by some pretty reliable sources and has been met with no real denial from either party.

So: what do you think? Was Miranda entitled to be present at the meeting between Corey and Leah about Ali and Aleeah? Or was Leah right in expecting to be able to meet with the father of her children one-on-one to discuss their children?