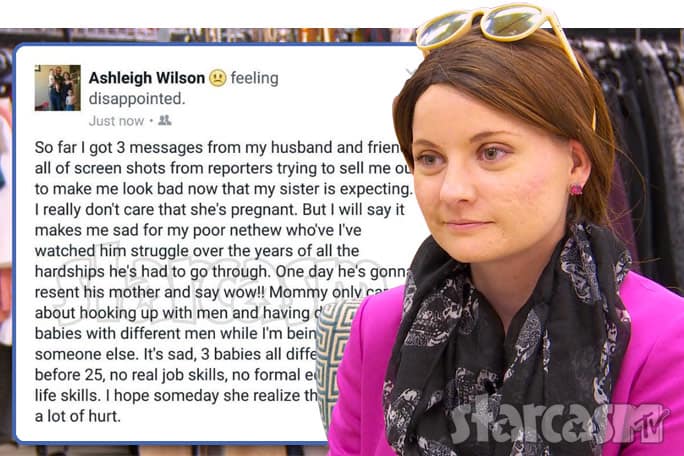 On Wednesday, Teen Mom 2 star Jenelle Evans FINALLY confirmed that she is currently pregnant again, and on Thursday her sister Ashleigh took to Facebook to share her reaction — which was anything but joyful.

“It makes me sad for my poor nephew,” Ashleigh says of the pregnancy’s effect on Jace. “One day he’s gonna resent his mother and say wow!! Mommy only cares about hooking up with men and having different babies with different men while I’m being raised by…someone else.”

Ashleigh then passes some serious judgment on her sister: “It’s sad, 3 babies all different dads before 25, no real job skills, no formal education, no life skills. I hope someday she realize that she’s done a lot of hurt.”

When Jenelle officially confirmed her pregnancy, she said she kept it a secret from most everyone, including her mom. (Well, excluding the internet, which has known since May.) It’s unclear if Ashleigh knew or not. She did adamantly deny the pregnancy reports on Facebook as recently as July. 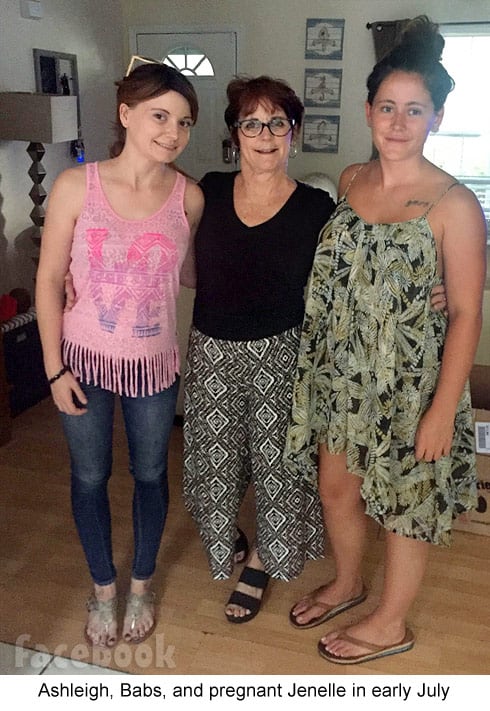 Meanwhile, Ashleigh has some very dramatic events going on in her own life right now! In case you missed our last update, after Ashleigh’s rather extensive appearance on the Being Babs Evans MTV special, she had a terrible falling out with her second ex-husband, and father of one of her two children, that included accusations of kidnapping and more. Here is an excerpt of one of her Facebook posts about her relationship with Lee from July:

When I look back 6 months after all the horrible crap my ex has put me through its amazing how I’ve met so many great people, made new friends, work hard and take care of my kids alone. When I was with him I had 0 friends, always left home alone with kids, he never took me out, never went anywhere with me. Never did anything nice for me. All I did was cool clean and take care of kids and him while he sat in his ass all day/night. It was all about him, he always did what he wanted. Now I’ve moved on and life is much happier. Eventhough I do wish he would of got help and wait to see if things would turn out differently I guess I’m glad I stayed away because he’s never going to get better. I would of never been happy. Im glad I know I deserve better. All I need is my two boys and maybe a good man.

As much as it hurts sometimes I see my life happier now. It’s amazing how one person can tear you down into pieces overtime.

I’m good. I’m too good of a mother and women to put up with crap. Toxic people never win only if you let them. Always stay above.

Just stay above and remember all the good you did out weighs the bad he’s done. Day by day you’ll see you worth and deserve a lot more.

So what’s the update on Ashleigh? She is taking both her children and moving up to New Jersey to be with her ex Lee! The announcement came in early August, not long after Ashleigh had yet another falling out with sister Jenelle:

After the past few days of bullsh!t with a certain someone, I’m done. I’m done with NC. I’m moving up to NJ this month. Yep that’s right, Lee and I are getting back together. Even though we used to drive each other insane we love our little family and we’re moving on to a new fresh chapter for us.

I’m ready to drive a uhaul in two weeks and start putting our stuff in storage up there until we find a place. I’m gonna make sure everything works and goes planned.

Here are a few more updates from Ashleigh from Facebook over the past few weeks, with the most recent being from Wednesday:

AUGUST 5
I’m leaving for Philadelphia to look for a place for my husband and the kids to live and a job I’m looking in PA and NJ. I’ll be leaving on the 12th for a week. If anyone has any leads let me know. We are weighing out all options. The move date hopfully will be Aug 31st.

The cost of living in nj is extremly higher than PA. So we are weighing out all options. We need to make a descion that best for the kids. We can buy a house in the mountains in PA for less $50,000 with taxes lower that $1000 a year and have the house paid in full with $100-$200 mortgage. We can rent in PA for a decent place for $600-$700 a month. Not sure about jobs in Pa either. We can buy a house in Nj but the taxes are over $5000 a year and pay $1300 a month in a mortgage etc. that’s $500-$600 a month in taxes which is insane. We can rent in NJ but we don’t want to have to struggle and pay $1200 a month with utilities. PA has no sales tax on food or clothes and had free 3year old preschool. NJ I’m not so sure. This is why I need to go up there and start applying for jobs and looking for a place with more research. My husbands looking for places this weekend he’s been working 16 hour days 6days a week. He hasn’t had time.

AUGUST 14
I’m in NJ for a reason. To get everything situated with my husband and kids. I’m not sure how many times I’ve said I don’t care for the stalker Twitter bullcrap. I’m not sure when I’ll be back or if I’m coming back to NC at all. I took 3 weeks off from work. I have 2 job interviews here and really don’t care for drama from teen mom stalkers. So I’m asking again politely to reframe from PM. All odd texts/phone will be blocked. I don’t want to deactivate my account. Just please leave me alone.

I’m not even going to comment on the f**kery I’ve got in my inbox etc since I left NC. Its rediclous.

COMMENTER: Totally delete n Block them. It’ll be less stressful, trust me it’ll be a relief to not have to see negative messages n comments on the constant

That’s what I always do. Tired of hearing these welfare queens 19 year old baby mamas who lack common sense or intelligence blow my shit up. I’m 28, married don’t care for the jealous drama. It’s been 7 years of this crap. Unfortunately it will never stop because my family’s famous. Only 2 people recognized me here in NJ so far and said nothing but good things. People will believe what they see or hear online because they are ignorant, yet very naïve to what they hear and absorb. It’s all good.

AUGUST 23
I want to thank everyone for making this move easier for me. If anyone needs free household stuff let me know I’m leaving this weekend and starting me new journey with husband Lee ******* and my children. id rather give it to those I know who need help like youve all helped me, rather than donating it all❤️.

AUGUST 24
As I leave NC and pack up, I get texts from everyone telling me the tabloids are selling me out. It’s really sad some people try to ruin my life because I have what they don’t. No one will be able to pick on me ever again. Because I’m moving I can’t be used as a puppet anymore. Now that I’m moving on, I will NEVER return to NC again. I’m finally free from all the toxicity. For the first time in 6 years I feel as free as a bird!! I feel a big burden has been lifted!! I will NEVER let anyone put me in a cage to where I can’t fly free as a bird should. I’m finally able to do as I please without restraint, worry or stress!!

No one deserves the 18 years of the mental torment, mental anguish and being controlled like I have. It’s time to cut ties completely. These past 6 years have been horrible. Now I can disappear without anyone knowing where and start over with a new identity almost.

We certainly wish Ashleigh and her family the best and hope her relocation to New Jersey has the happy ending she is looking for.