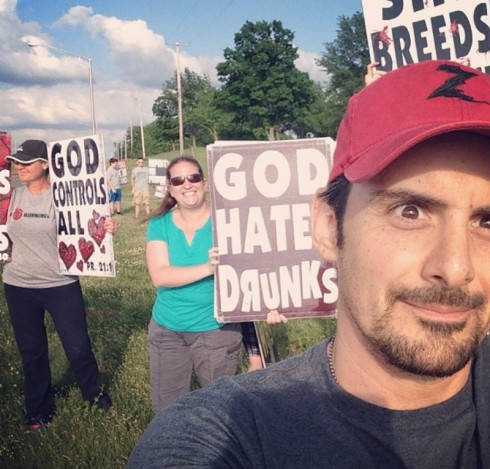 Despite leader Fred Phelps’ death earlier this year, remaining members of the Westboro Baptist Church continue to spew their messages of hate at even the least deserving places of protest — like Brad Paisley’s recent concert in Bonner Springs, Kansas.

After catching wind of the protest, the Who Needs Pictures singer decided he did need a picture with the infamously ignorant picketers.

Rather than confronting the people — who were holding signs that declared “Sin Breeds Violence,” “God Controls All,” “God H8s Your Stars” and “God Hates Drunks” — Brad asked them to gather around while he posed for a selfie.

He later posted a video (captioning it “Crazies for Paisley”). He also posted a picture (at top), adding, “Westboro Baptist Selfie!! Or west-Burro(a**) selfie. Hopefully they can hear the show out here. We’ll play loud.”

The best part of it all is the smiling lady in the back… It’s almost as ironic as when WBC protested with the notorious anti-gay posters while one of the church members was wearing a Glee shirt.

Adding to the irony, one of the WBC members begged him to tell his fans to “love your neighbor!” She also implored Brad to have a talkin’ to Blake Shelton and Chely Wright, who’ve both spoken out against Westboro Baptist.

Westboro Baptist responds to news of the death of Fred Phelps Sr.