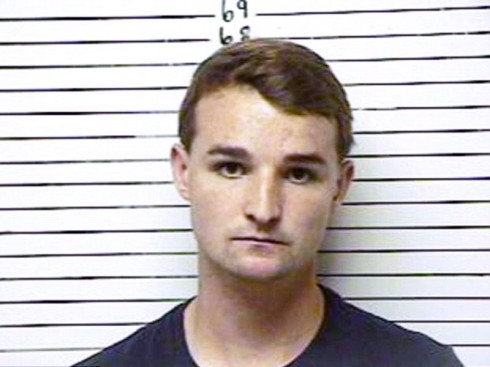 University of Oklahoma college freshman Alan Hruby confessed to murdering his parents and teenage sister in an attempt to get his inheritance.

“He explained that there was a loan shark company in Norman that he owed approximately $3,000 to,” Stephens County District Attorney Jason Hicks told KFOR. “He felt like if he murdered his mother, his father and his sister, he would be the only one, the only heir, to their estate.”

According to documents obtained by People, the 19-year-old student told investigators he stole father John Hruby’s 9 mm pistol last Thursday. He shot mother Tinker Hruby in the family’s kitchen. Then he waited until 17-year-old sister Katherine Hruby walked in and shot her, too. He waited an hour longer until his dad got home and then shot him twice.

Afterward, he disposed of the gun and the DVD player that kept video surveillance of the home. Then he returned to his dorm, 75 miles from his hometown, and made a point of saying that’s where he was for the night. He later told officers he left his phone at the campus so that it couldn’t be tracked to his parents’ house.

You could say we have a good view. #Oklahoma #universityofoklahoma #headington #6thfloor #night #home #football #stadium

After the Thursday murders, Alan went down to Dallas for the weekend to watch the Oklahoma-Texas game where he continued to post on social media about his “great” college experience.

When the scene at the Hruby home was discovered on Monday, officers called Alan in to tell him the news.

“Any tears that he shed, they were crocodile tears,” attorney Hicks said. “It wasn’t remorse because ‘I’ve lost my mom, my dad and my sister,’ it’s remorse because he knows that his life is basically over… The only remorse we’ve seen is because he got caught.”

(I don’t know if it will show for anyone else, but an advertisement for a “quick loans” place played at the beginning of this video for me. Very unfortunate placement.)

When Alan was initially questioned, the police chief said “some of the timelines and things that he was giving us were not matching up with information that we had.” Suspicious about the story, officers detained Alan for violating the terms of probation by going to Texas for the football game. The probation stemmed from his 2013 charge for credit card fraud, which he received after using his grandmother’s name to spend $5,000 in Europe.

Police Chief Danny Ford said Alan then “confessed and gave a pretty good description of what went down.” Alan was charged with the murders on Wednesday. The district attorney said he will decide whether to pursue the death penalty after talking with the rest family about what they want.

PHOTOS Murder Chose Me renewed for Season 3, and filming is underway