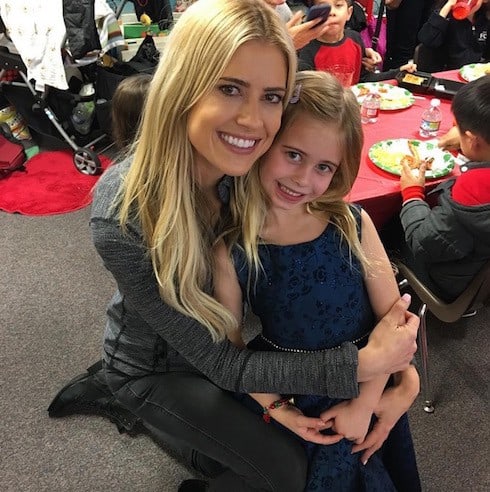 Christina El Moussa has been making the publicity rounds of late, in promotion of her current People magazine cover story. It’s in that story that Christina reveals for the first time a miscarriage she suffered back in 2014. The feature explains that Christina faced a “grueling” struggle to get pregnant through in vitro fertilization shortly after Tarek began treatment for thyroid cancer; she suffered the miscarriage before becoming pregnant with her son Brayden.

RELATED: Tarek and Christina El Moussa’s divorce gets even uglier, thanks to rape and abuse allegations

Christina also touched on the topic briefly and peripherally during an appearance on Good Morning America. Her interview was and largely an opportunity for Christina to continue presenting a brave public face while her divorce from Tarek continues. GMA co-host Michael Strahan only referenced Christina’s “infertility,” a word that Christina echoed while listing the major struggles–the 2008 housing market crash and his cancer diagnosis were the others–she and Tarek faced together. “And now we’re going through a very public divorce,” Christina concluded. “But, you know, despite everything, our primary focus is–and always will be–our kids.”

Furthermore, Christina confirmed that she and Tarek are going to continue with Flip or Flop. Reports of the show’s coming demise went wide after news of the El Moussa divorce broke; since then, however, HGTV reportedly threatened the couple with a breach of contract lawsuit should they fail to finish out their current contract. So it seems they’ve seen the light where that topic is concerned. And Christina is more than willing to play along: “Tarek and I are filming Season 7 of Flip or Flop. We film together three or four days a week; we have a great crew; we have so much fun on set, and we look forward to continuing the show.”

Strahan’s shining moment came when he followed up on Christina’s answer, asking whether it’s “strange or unusual” to film a show alongside someone you’re divorcing (because he allegedly joke-threatened to rape you in front of the “great crew”). Christina responded that she and Tarek “met at work” and “worked together before [they] ever started dating,” so their current situation is fine. She then mentioned that the two of them are also involved in a series of house flipping seminars together, and that they’ll “always” work together. Which is an indirect way of saying that their business interests are so intertwined that they more or less have to get along, in public at least.

Flip or Flop Season 6 airs Thursday nights at 9 on HGTV. Season 7 is expected to debut later in 2017.