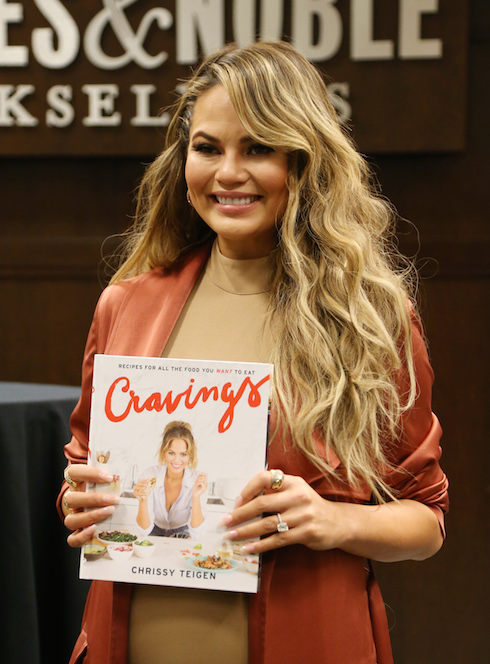 Chrissy Teigen may be best known for her work in front of the camera, but those who frequent her Delushious food blog or follow her on social media know the expectant mother (and wife of John Legend) is also a phenomenal cook. The self-proclaimed foodie announced on Wednesday that her cookbook, Cravings: Recipes For All the Food You Want to Eat, was officially in stores… and that those who had purchased the book early received a gift on page 111, courtesy of her dog, Pippa.

Early purchasers of my cookbook were gifted with my tiiiiiny phone number on Pippa’s collar on page 111. Learned this after 100 or so calls!

Chrissy later confirmed that the phone number snafu had been taken care of, although she did give her Cravings crew a shout out for the messages she had received while the number was active.

I have since changed it but thank you for all the kind voicemails! — christine teigen (@chrissyteigen) February 24, 2016

She also took to Twitter to share her excitement of the cookbook’s initial Amazon sales, boasting her runner-up spot.

oh no big deal just ME AND HARRY POTTER!!! Number 2 in ALLLLLL books on amazon!! pic.twitter.com/5c8YsQN5w1

Given Chrissy’s previous cooking-related roles, it seems that the cookbook has been a long time coming. The model has filmed two specials for the Cooking Channel, and before becoming LL Cool J’s co-host on Spike’s Lip Sync Battle, she served as a judge for the MTV2 cooking show, Snack Off. Chrissy also served as a judge/mentor for an episode of Beat Bobby Flay in 2014, and has made appearances on ABC’s The Chew.

To keep up with Chrissy (in and out of the kitchen) check out her latest dishes on the Delushious blog, and be sure to tune in to new episodes of Lip Sync Battle on Spike, Thursdays at 10/9c.

PHOTOS President Obama is just like us, he eats Mexican take out