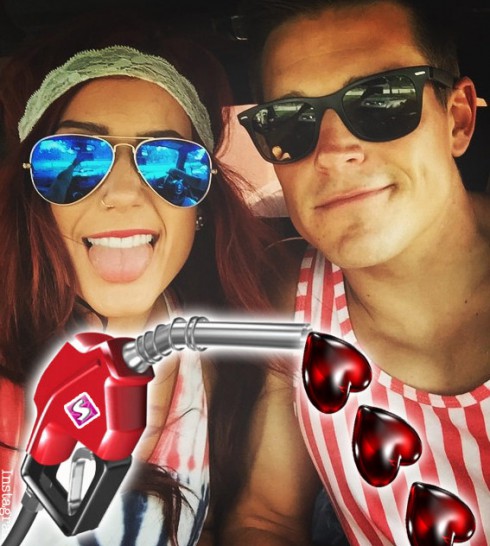 During a recent presser, Teen Mom 2 cast member Chelsea Houska shared the adorable, high-octane story of how she met her current boyfriend, Cole DeBoer. It turns out it was very much love at first sight–and that their first sight just so happened to be at the neighborhood gas station.

This unleaded love story was hinted at back when reports of the two being an item first emerged, but it’s fun getting the deets behind the meet straight from Chelsea:

He was across at the other pump… And I looked, and he was staring at me. We didn’t even talk. We just kept looking at each other because we’re both shy. And then we were passing each other when we left because we lived out towards the same way. I went home to my friend and I was like, ‘I just saw the guy I’m going to marry at the gas station, but we didn’t talk. And a few days later, he contacted me on social media and was like, ‘Hi. I got gas next to you the other day.’ And I was like, ‘Thank you, Jesus.’

That’s right–Cole used the old “I was next to you at the pump” line, and it worked!

The pair are set to move in together after dating for a year.

An obviously smitten Houska wasn’t shy about talking up her man:

Honestly, there’s just no one that I’ve met that’s so respectful and just nice and I trust him, which is a big deal, because it’s hard for me to trust people or guys, mostly. And he’s so sweet, kind of like old-fashioned gentleman type of guy.

Check out this preview for Thursday night’s Teen Mom 2 premiere, which features Chelsea teaming up with Taylor Halbur, the mother of Adam Lind’s daughter Paislee, as they try to figure out the best way to legally fight Lind’s custody demands: