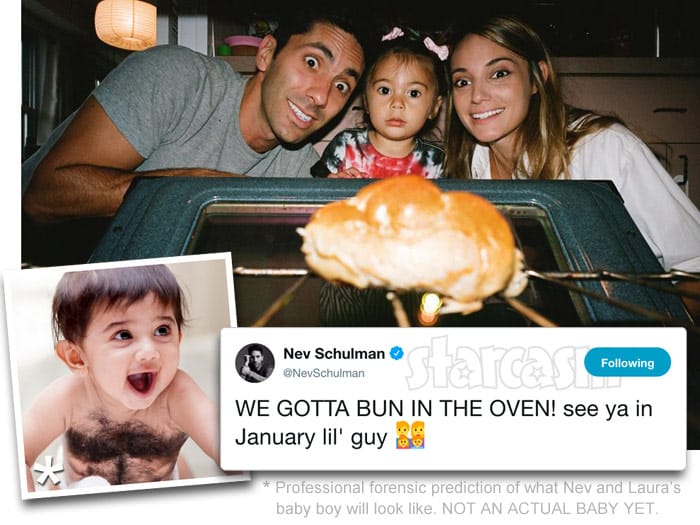 Catfish host Nev Schulman and his wife Laura Perlongo revealed moments ago that they will be adding to their growing family as Laura is pregnant for the second time! With a boy! And of course the couple made the announcement with their usual dose of joy and humor.

“WE GOTTA BUN IN THE OVEN! see ya in January lil’ guy ?‍?‍?‍?” Nev tweeted, along with a photo of an actual bun being placed in an oven — much to the wonder of Nev and Laura’s almost-two-year-old daughter Cleo (included above).

Laura shared a similarly funny photo in which Cleo’s sense of wonder has been replaced by an apparent sense of terror:

Cleo is getting a baby brother! It’s gonna be great! ?? pic.twitter.com/DxmEx1hTWP

Congratulations to Nev, Laura and Cleo! We look forward to yet another fun-spirited pregnancy with lots of baby bump buffoonery on social media!

The pregnancy announcement serves as a positive bookend to a bit of a roller coaster couple of years for Nev and Laura. The couple announced they were expecting their first child back in May of 2016, and they became officially engaged a couple weeks later. Laura gave birth to daughter Cleo in October and the new mom and pop officially became husband and wife with a wedding in July of last year.

Fast forward almost a year and the couple found themselves in a maelstrom of controversy after a former Catfish cast member accused Nev and another member of production of sexual harassment on the set — an accusation that Nev flatly denied. Production on the show was halted as MTV and Viacom launched an investigation into the allegations with a third party investigator. Catfish production resumed in June after the results of the investigation showed that the allegations made against Nev were not credible.

Last week, Nev and his co-host Max Joseph made a bittersweet announcement that the current season of Catfish would be Max’s last as he needed to have more time to focus on his other film making projects. “Although I have a heavy heart, I am also excited for everything that’s to come—for myself, for Nev, for our crew and for the show,” Max wrote in a lengthy statement announcing his departure. “Thanks for watching, thank you for the love, for the memories, and the memes. ✌️❤️ It really was a f**king blast and I am eternally grateful for every second of it.”

I dunno, I’m starting to think that Cleo’s little brother might be named Max. ?