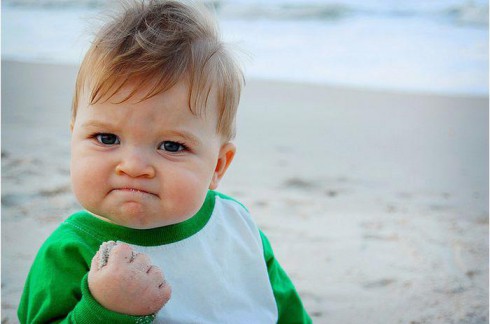 In a fascinating study that transcends the nature vs. nurture debate, scientists discovered the majority of us are prejudiced toward individuals who are believed to be different. Most shockingly, the experiment was performed with nine- and 14-month-old infants — not your typical tormentors.

“The fact that infants show these social biases before they can even speak suggests that the biases aren’t solely the result of experiencing a divided social world, but are based in part on basic aspects of human social evaluation,” said Kiley Hamlin, who conducted the experiment as a graduate student at Yale University.

As explained in Psychological Science, the experiment involved posing simplistic scenarios to groups of nine- and 14-month-old babies. Working on the previous finding that babies are drawn to those who have common tastes in food and toys, the researchers first determined whether the babies preferred green beans or graham crackers. The researchers then performed a puppet show where a rabbit would either say “Mmm, yum!” or “Ew, yuck!” when sampling the two foods. In a second puppet show, the same rabbit puppet was shown playing with a ball that began to roll toward two dog puppets. One of the dogs helped the rabbit by returning the ball; the other hindered the rabbit by stealing the ball.

Then the researchers allow the babies to select one of the puppets.

The conclusion that babies don’t always prefer the good guy was an exciting, but morally disappointing, finding for Karen Wynn, a Yale professor and senior author of the study.

“I was surprised, and my liberal bleeding heart sunk like a stone, when we found them actually choosing, really robustly, the puppet who punishes,” Wynn told the Boston Globe.

In a more complex stage of the experiment, researchers introduced a neutral puppet. For this phase, the 14-month-olds preferred the helpful puppet when the rabbit was similar to them and the neutral puppet rather than the helpful one when the rabbit was dissimilar. However, the younger babies did not show significant differences. Wynn suggested that the neutral dog may have been too subtle or that the addition of another puppet may have been too complicated for the 9-month-olds to comprehend.

Although the published findings have already gained a lot of attention, Wynn hopes to continue studying babies’ behavior.

Do you think we are bullies from birth?