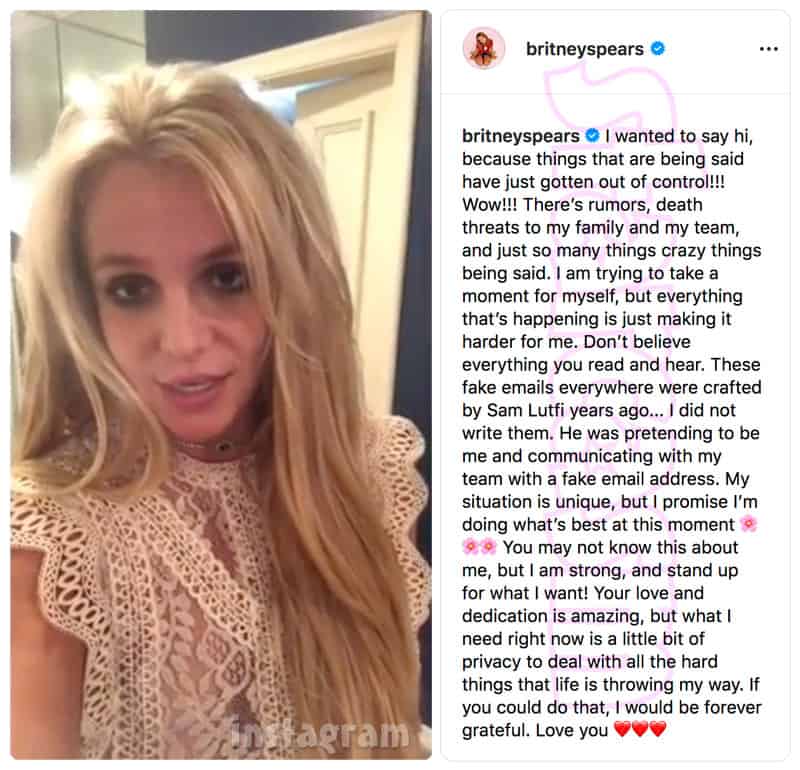 Earlier this month it was revealed that pop singer Britney Spears had checked into a mental health facility, reportedly due to the added stress of her father’s failing health. On Sunday, photos surfaced online of Britney leaving the Montage hotel with boyfriend Sam Asghari for a 24-hour Easter “day trip.” Although she has reportedly returned to the facility, Britney shared a video update on Instagram moments ago letting her fans know more about what is going on, and how she is doing.

“Hi guys! Just checking in with all who are concerned about me. All is well. My family has been going through a lot of stress and anxiety lately, so I just needed time to deal. But, don’t worry, I’ll be back very soon.”

The video is very brief, but Britney goes into a lot more detail in the caption. “I wanted to say hi, because things that are being said have just gotten out of control!!! Wow!!!” Britney begins, before elaborating further. “There’s rumors, death threats to my family and my team, and just so many things crazy things being said.”

Britney strongly encourages everyone to be wary of fake news concerning her and her family. “Don’t believe everything you read and hear,” she cautions. “These fake emails everywhere were crafted by Sam Lutfi years ago… I did not write them. He was pretending to be me and communicating with my team with a fake email address.”

“I am trying to take a moment for myself, but everything that’s happening is just making it harder for me,” Britney continues. “My situation is unique, but I promise I’m doing what’s best at this moment ???”

The 37-year-old pop star concludes on a positive note as she asks that everyone just give her a little space. “You may not know this about me, but I am strong, and stand up for what I want! Your love and dedication is amazing, but what I need right now is a little bit of privacy to deal with all the hard things that life is throwing my way. If you could do that, I would be forever grateful. Love you ❤️❤️❤️”

As mentioned above, it was reported that the poor health of Britney’s father, Jamie Spears, was a major contributor to her recent issues. Jamie’s health problems began in late 2018 when his colon spontaneously ruptured. Britney would later share an emotional post about her dad’s condition as she announced the cancellation of her new Britney: Domination show in Las Vegas:

I don’t even know where to start with this, because this is so tough for me to say. I will not be performing my new show Domination. I’ve been looking forward to this show and seeing all of you this year, so doing this breaks my heart. However, it’s important to always put your family first… and that’s the decision I had to make. A couple of months ago, my father was hospitalized and almost died. We’re all so grateful that he came out of it alive, but he still has a long road ahead of him. I had to make the difficult decision to put my full focus and energy on my family at this time. I hope you all can understand. More information on ticket refunds is available on britneyspears.com. I appreciate your prayers and support for my family during this time. Thank you, and love you all… always.

A source close to the family tells People exclusively that “Britney just needed to focus on herself” as she cares for her father Jamie after his “life-threatening” colon rupture.

“Her dad being sick has taken a toll on her,” the source continues. “He nearly died and actually had another surgery a few weeks ago. He’s not doing well. They’re so close and it has been a lot. There is nothing dramatic going on with her — she just realized she needs to make sure to take time to care for herself.”

According to multiple sources, @BritneySpears has entered a mental health facility after becoming overwhelmed dealing with her dad's health issues. We join millions and millions of others in wishing Britney and her family all the best. ❤️ https://t.co/3qZnpxrMlx pic.twitter.com/4vMtkt36ho

The Blast later reported that Britney’s dad’s health “was just a smokescreen to distract people from the downward spiral the singer was experiencing.” The site says Britney was spiraling downward and trying different kinds of medication at the time that her Las Vegas residency was being negotiated.

We’re told Jamie realized how dire the situation was, and our sources say he “did the right thing and took action” by deciding if Britney did not actively work to get herself better, the plug would be pulled on the “Domination” residency.

During the same time the situation was unfolding, her father Jaime’s colon ruptured and he was rushed to the hospital to undergo emergency surgery.

We’re told the decision was made to use Jamie’s illness as the reason for her postponing the Vegas shows. Our source says the story was used to mitigate the press, and the idea of Spears taking care of her father was just “damage control.”

One source who worked with the team at the time tells us, the notion that Britney canceled or postponed a multi-million dollar Vegas show deal to help medically care for her father is “complete nonsense.”

Our source makes it very clear things had gotten so bad, Spears was unable to care for herself, let alone provide medical care to her father in any capacity. In fact, we’re told after Jamie underwent surgery for his ruptured colon, he spent time recovering back home in Louisiana while Britney stayed in California.

Of course, we wish Britney all the best and hope that taking the time away will help her regain some stability and her well-being.

UPDATE – Britney uploaded a workout video and revealed that she has lost five pounds due to stress:

Who knew stress would be a great 5 pound weight loss. Yay for me ??

#HATERS It’s time for another round of “Celebrities Read Mean Tweets!”