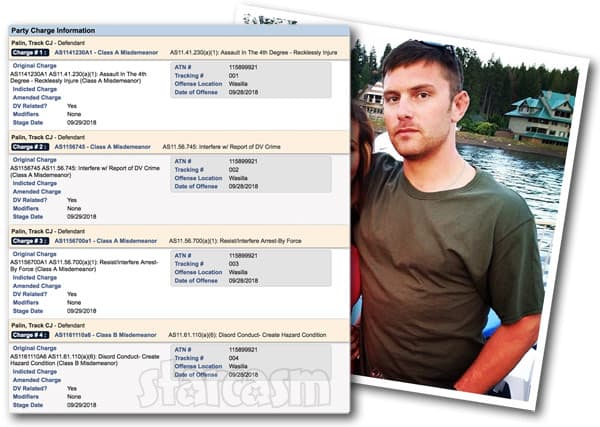 Track Palin, the troubled brother of Teen Mom OG star Bristol Palin, is back behind bars in Alaska today after an alleged incident in which he assaulted a woman at his home before taking her phone and eventually resisting arrest after police arrived on the scene.

Police were called to the 29-year-old Army veteran’s home in Wasilla, Alaska on Friday night at approximately 11:30 PM. An online dispatch first reported by KTVA states that an “investigation revealed [Track Palin] assaulted an acquaintance at his residence.” The officers continue: “When the acquaintance attempted to call authorities, he prevented her by taking away her phone. While being placed under arrest, Palin physically resisted troopers.”

Track Palin is currently being held without bail at the Mat-Su Pretrial Facility where he faces charges of fourth-degree domestic-violence assault, interfering with the report of a domestic-violence crime, resisting arrest and disorderly conduct — all of which are misdemeanors.

It is unclear at this time who the woman was who was allegedly assaulted by Track — whether it was a family member, his girlfriend, or some other acquaintance.

Friday’s arrest is just the latest issue for the son of former Alaska Governor Sarah Palin. He was previously arrested for domestic violence in 2016 after he reportedly punched a woman in the face at the Palin family home. Track was in possession of a gun at the time and would eventually strike a plea deal in which he pleaded guilty to a weapons charge.

In December of last year, Track was arrested yet again and charged with assault, burglary, and criminal mischief after an altercation with his father, Todd Palin, escalated and eventually resulted in Todd pulling a gun on his son before Track disarmed him and punched him repeatedly. As part of a plea deal, prosecutors dropped the assault and criminal mischief charges in June, and the remaining felony burglary charge was amended to a misdemeanor charge of criminal trespassing in exchange for Track’s guilty plea.

Track was given the ability to make his sweet plea deal even sweeter by entering a 9-12 month therapy program. When completed, he would be able to lessen his remaining charge from first degree trespassing to second degree trespassing.

The most recent docket entry for this case was on August 13 and reads: “Temporary Order – Release defendant on this case on 8/14/18 at 2pm per Judge Wallace.” The next scheduled hearing was set for October 1. I assume that Track will lose out on his deal for the lesser trespassing charge due to his most recent arrest.

Clearly, Track Palin has some very serious issues that put those people close to him at risk. Also clear is the fact that he has had very skilled legal representation that continues to mitigate Track’s legal troubles and somehow craft a criminal record that consistently prevents him from being convicted on any domestic violence and/or assault charges. That needs to stop. This is the third incident in three years, and even if Track manages to wrangle out of serious prison time, there needs to be those kinds of convictions on his record for any similar charges in the future.

It’s unclear if Track will be featured on the upcoming season of Teen Mom OG. Bristol has not officially responded to her brother’s arrest, but she did post this inspirational text graphic on Instagram yesterday: 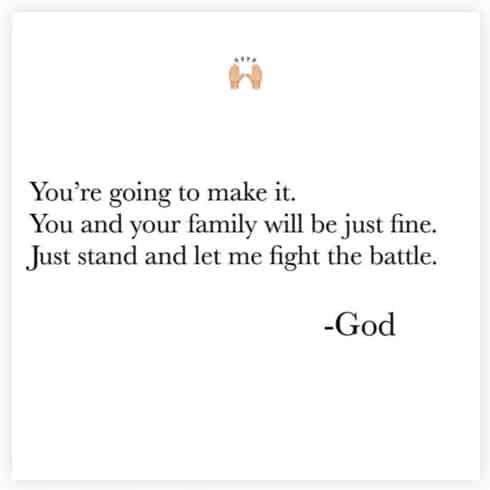