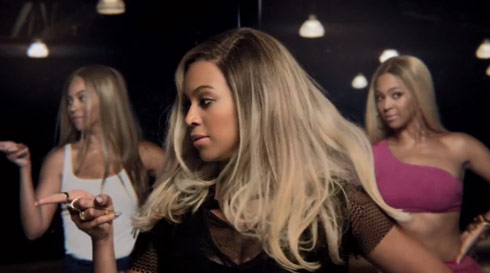 After teasing of a big announcement earlier in the week, Beyoncé has revealed not one, but two big projects. In addition to starring in a new Pepsi commercial in which she previews her upcoming Timbaland-produced record “Grown Woman,” Beyoncé is also featured on the soundtrack for the soon-to-be released flick, The Great Gatsby.

Beyoncé’s new Pepsi commercial is titled “Mirrors” and features her facing off with three of her most iconic looks of the past including her “Bootylicious” pink number, her “Crazy In Love” jeans and white tank, and her “Single Ladies” one-piece.

“It was the first time I saw those costumes in years and it was very emotional,” Beyoncé says of the ad. “I’m proud of those moments and they all connect in some way and have helped me evolve into who I am today.”

“I had so much fun collaborating on this campaign with Pepsi,” she adds. “I got to re-live some of my favorite past characters and looks.”

In next month’s The Great Gatsby, Beyoncé will be singing a rendition of Amy Winehouse’s “Back To Black” with Andre 3000 — and that’s not her only song on the film’s soundtrack. Also on the list for the flick (on which Jay-Z is an executive producer) is another song by Beyoncé, “Crazy In Love,” which will be sung by Emeli Sandé and The Bryan Ferry Orchestra, and Jay-Z’s own “100$ Bill.”

Below is the trailer for The Great Gatsby which features Beyoncé singing Amy Winehouse’s “Back To Black.”