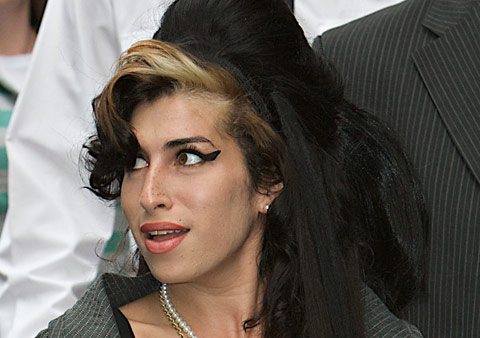 After a two year struggle with addiction, shambolic public performances, a failed marriage, and an extended drunken excursion in St. Lucia, Amy Winehouse’s third album is expected to finally be released in 2010.

Island Records co-president Darcus Beese was floored by the few tracks her heard from the album, saying they’re “sensational.” She’s been writing and recording the album in “fits and starts” for a while, but it’s nearing completion.

It seems like Amy’s been drying out lately and actually getting a lot of work done. She recently helped her goddaughter Dione Bromfield record her own album on Amy’s new label Lioness Records. This Saturday Amy will make her first public appearance in ages by singing backup for Dionne on Britain’s Strictly Come Dancing. The chanteuse pair will perform “Mama Said.” Dionne’s only 13, so hopefully Amy will be bright-eyed and sober for this performance, like she is in the video she made with Dionne, seen below:

Are Amy and Blake back together?