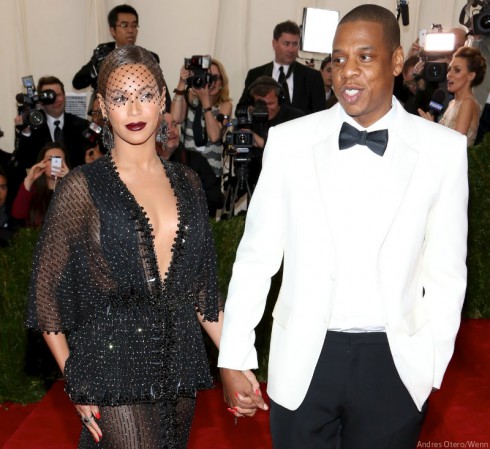 Although Solange Knowles seemed to be the only one freaking out in footage leaked from a May 4th elevator fight with Jay-Z and Beyonce, sources report Mr. and Mrs. Carter regularly get into their own blow-out arguments — with disregard to what friends or family may be present to hear the dirty details.

According to a newly solved item on Blind Gossip, Jay-Z instigated a yelling match with Beyonce before her Super Bowl performance in 2013. Kelly Rowland, Michelle Williams, staffers and family members were in the room.

“He became angry that she wasn’t giving him her full attention, and he grabbed the mobile device out of her hands. He discovered that she was texting another man. He started going through all of her texts,” said the blind item, which was posted on Feb. 6, 2013. “His voice started out low and he was swearing: ‘You mother f**king b**ch!’ As he scrolled through the texts, his voice got louder and louder until he was screaming at her. ‘YOU MOTHER F**KING B**CH!!! YOU MOTHER F**KING B**CH!!!”

After a while, “[Beyonce] jumped up and got in his face and started yelling and swearing right back at the man! She tried to grab the phone back from him, but he pushed her away and continued going through the phone and screaming at her, pushing her away, berating her, and started calling her every derogatory name for a woman in the book.”

The venue staffers present were reportedly frozen with fear, but Kelly, Michelle and those close to the couple were unfazed.

“While it was shocking to the staffers that the two were going at each other so viciously, it was even more shocking to them that the two other women and the relatives and the personal assistants just sat there quietly the whole time, minding their own business through the screaming and the grabbing and the shoving,” the blind item reported. “It was as if this horrific behavior was so commonplace that they couldn’t even bother to look up from their phones. The venue staffers were also surprised that nobody attempted to remove Blue Ivy from the room while this was all going on.”

After that brawl, Blind Gossip said Beyonce, Kelly and Michelle went forward with business as usual — delivering that unforgettable Super Bowl Halftime performance. The same seems to be happening with the Carter/Knowles families after Solange and Jay-Z’s fight earlier this month: Beyonce and Solange took a weekend trip to Costa Rica for Kelly Rowland’s wedding. Then, on after the news of the fight broke on Monday, Beyonce and Jay-Z sat courtside at an NBA game.