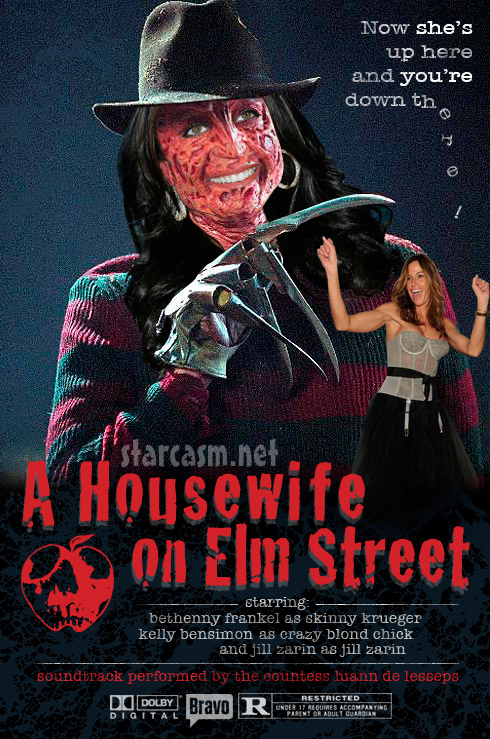 Krazy Kelly Bensimon gives us all a glimpse into her murky subconscious while talking on the phone with Jill Zarin in this week’s episode of The Real Housewives of New York City. Kelly has been on a bachelorette-type vacation with Ramona, Bethenny, Alex and Sonja celebrating the renewal of Ramona and husband Mario’s wedding vows. As might be expected, Kelly and the pregnant Bethenny (whose father just passed away) start butting heads and cat fighting, nearly ruining the first night of the trip.

The tenuous grasp on reality that Kelly possesses is shattered the next day when Bethenny drops off a bag of Skinny Girl brand goodies at her door – something she does for all the women on the trip. Kelly calls her mutual anti-Bethenny buddy Jill Zarin and starts jibbering about nightmares, Bethenny trying to kill her, tongues made out of knives…. I’ll just let you watch:

Is Kelly really that crazy or is this just a Bravo publicity stunt for the new horror movie A Housewife On Elm Street?

Before I came here I’ve had nightmares for the last week about her stabbing me. I’m not kidding you. Like I have her with that black hair like errrrr errrrr errrrr (makes a stabbing motion with her hand) I’m like ooeeee ooeeee oooeeee!

Poor, poor Kelly. Not only is she a frightened little sex kitten, but she still has difficulties applying adages and words like “literally” correctly. And I like how Jill tries to offer her support without really knowing what in the world she’s talking about – sort of like when a politician makes some ridiculous statement and members of his or her party try to stand behind him while keeping their distance.

“She’s not making any sense to me. I can’t get a full thought out of her and I, I like her so much and I don’t want anything bad to happen to her.”

The Big Apple ladies definitely take home the prize for feuding! Alex nailed it on the head when she said Jill was still in high school – the whole cast seems to be grown women who are still in high school, and it makes for a lot of guilty pleasuretastic joy for me!

I’m beginning to see why this season was dubbed “The Ramona Coaster” by Andy Cohen, or was it Bethenny during Watch What Happens Live? Anyway, Ramona is definitely the tour de force driving the season! She hyper, funny, outspoken, sometimes oblivious but almost always sincere.And I have to admit she’s looking pretty danged good for 53!

VIDEO Bethenny Frankel shows how to workout in stilettos