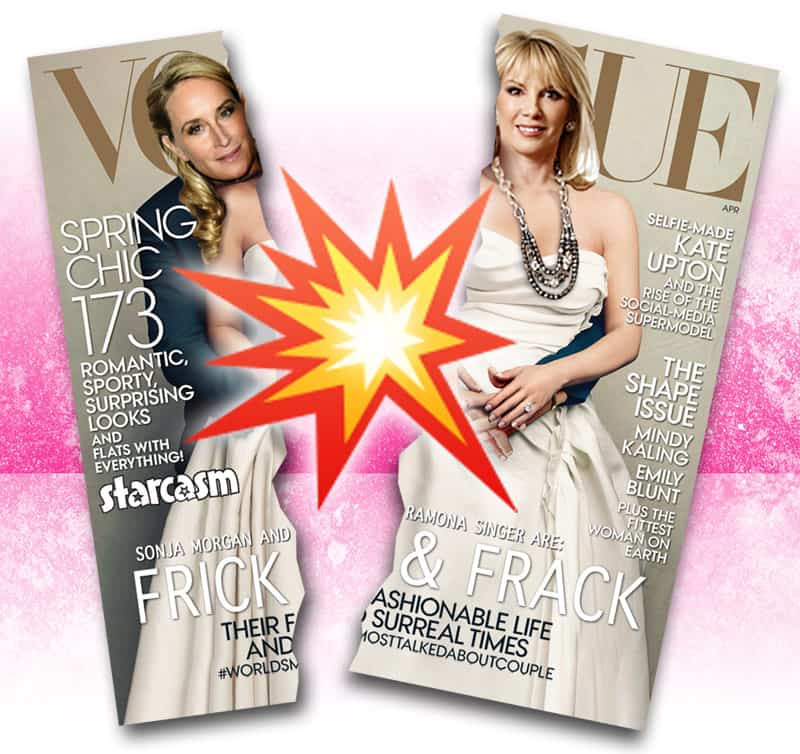 Could it be that #Ramonja is over?! The Real Housewives of New York City gal pal duo Ramona Singer and Sonja Morgan’s friendship looks to be in jeopardy, as the two got very Ramotional and Sonjupset at each other in Wednesday night’s episode over rumors that Sonja cheated on her ex-husband John Adams Morgan.

The verbal cat fight went down at a private charity shopping event at Henri Bendel, hosted by Ramona. After Sonja arrived, she confronted Ramona about not defending her when their co-star Dorinda Medley accused Sonja of cheating on her ex-husband at a dinner party.

Here’s the clip, followed by a recap:

“You know everything about me,” Sonja told Ramona, adding, “I would never cheat on my husband.”

“I’m sure,” Ramona concurred, before stepping it back a bit: “I mean, I wasn’t there at the time. We weren’t friends then.”

“You don’t need to be there, but you know that about me,” Sonja argued. She then seemingly revealed that perhaps she did cheat on her husband and confided the fact to Ramona! “And I told you. And you were the only one that knew. I didn’t want the whole world to know.”

Following the apparent confession, Sonja got back to chastising Ramona for not speaking up on her behalf during the dramatic scene with Dorinda.

“Sonja, I really wanted to put a lid on it,” Ramona explained.

Sonja wasn’t willing to let it slide. “She was accusing me of cheating on my husband!”

They went back and forth a bit about how the scene with Dorinda could have gone down differently, before viewers were shown a narration clip from Ramona further suggesting she’d held back on what she knew about Sonja’s relationship with her ex-husband.

“I knew some things that Sonja told me privately, but Sonja always told me that in confidence,” Ramona said. “She said, ‘Don’t ever share that.’ So I don’t really want to take sides. I mean, that sounds a little to me like high school.” 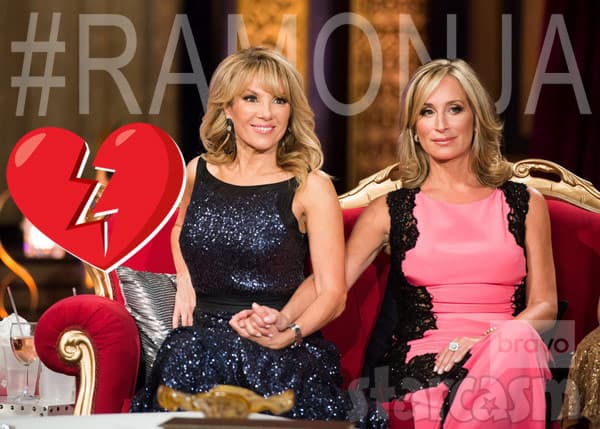 The cameras cut back to the event, and Ramona told Sonja, “You are an adult! You’re not, like, twelve years old. You can fight your own battles.”

“I have been there no matter what you do,” Sonja responded. “You’re my friend.”

Things then took a turn when Ramona stated that she is closer to Carole and LuAnn than she is to Sonja — a statement that seemed to shock Sonja. Ramona iterated her claim and added that it was because Sonja was an “absentee friend.”

At this point, both Sonja and Ramona resorted to yelling through cupped hands as the rest of the party-goers stared.

After the episode aired, Sonja took to social media to continue expressing her disappointment in the apparent dissolution of #Ramonja. She shared this photo of Ramona doing her hair, and included a lengthy caption:

I let Ramona do things like this to me and still have had her back through thick and thin. I mean where is the loyalty? I’m used to Dorinda sputtering her nonsensical rumors onto my face. But I expect more from Ramona after all these years of let’s see….soul searching??? Distract, pat my back? Something, but don’t laugh you whack job #TakesOneToKnowOne. #RHONY #bravotv #evenprisonbitcheshaveoneloyalfriend #ramonja ?
Load more comments

Always had her back #Ramonja That I expect. My family is everything to me. And to say hurtful things about my marriage that I respect so much is shameful. https://t.co/ILIIEyG1tc

Yea. I don’t expect Ramona to be mean. After I have always had her back #evenprisonbitcheshaveoneloyalfriend #rhony https://t.co/aIlf6rnDFw

Whose side are you on? Should Ramona have stepped in to defend Sonja when Dorinda came at her with cheating allegations? Or is Ramona right in that Sonja is an adult and should have been capable of fighting her own battle?

Meanwhile, we’re also left wondering: Is this the beginning of the end of #Ramonja? I suppose we’ll all need to tune in to new episodes of The Real Housewives of New York City airing Wednesday nights at 9/8c to find out!

Paul Nassif to file for separation from Adrienne Maloof this week