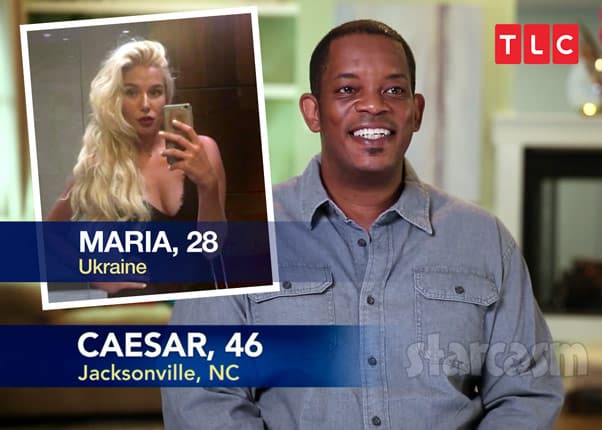 Tonight is the Season 3 premiere of 90 Day Fiance: Before the 90 Days, and one of the biggest questions heading into the new season surrounds 46-year-old nail tech Caesar Mack and his potential Ukrainian catfish Maria. Much like Caesar’s predecessor Ricky Reyes, producers are teasing Caesar’s story line in preview clips and promotional material by suggesting that Maria will be a no-show for their first in-person meeting after dating for five years.

So, what’s the spoiler scoop? It seems we may have a definitive answer thanks to one of Caesar’s nail clients!

First, let me set the stage with Caesar’s official bio from TLC:

A hard-working nail technician, Caesar has spent over $40,000 to financially support Maria, the beautiful woman he met online, for the past five years. Now, Caesar is planning to travel to the Ukraine to meet her, but Caesar’s coworkers are afraid she’s been scamming him this whole time. Once he meets her in person, Caesar plans on getting down on one knee and proposing to the woman of his dreams, but is Maria everything she says she is?

You may recall Caesar from the Season 3 preview trailer in which he is shown in his hotel room as he proudly shows off the chocolate panties and candy bra he brought to woo Maria with. Here’s a link:

TLC posted the first hour of the premiere episode online last week, and viewers see that Maria gets cold feet (literally) about Caesar’s planned trip to Ukraine. She says it is too cold there and she suggests that they meet up at a Mexican resort instead. Caesar’s balks at meeting up South of the Border, mainly because he would have to foot the bill for both of them to travel instead of just himself. This would be in addition to the $800 a month he says he sends to Maria already.

In the first hour, we do see videos that Maria sent Caesar expressing her affection. However, the possibility that she may be a catfish remains due to the fact that she doesn’t seem to ever use Caesar’s name, merely terms of endearment like “my husband” and “Big Daddy.” She does talk to him on the phone, though, so at least we know what she really sounds like.

OK, on to the potentially HUGE spoilers!

A redditor claiming to be one of Caesar’s clients at Aloha Nails in Jacksonville, North Carolina spilled all kinds of tea based on what Caesar told her while filming the show. (Full post embedded below.) She later updated her entry to clarify that the information she shared was what she “hearrrrrd, ALLEGEDLY” “for his NDA sake.”

Things get posted on reddit all the time, including way too many 90 Day Fiance rumors to count. However, everything seems to check out about this redditor’s claims, including her location as well as Caesar’s acting aspirations (more on that in a second). Plus, everything she says lines up perfectly with what we have (and haven’t seen) from TLC about Caesar’s story this season.

Here is a bullet point summary:

• Caesar and Maria were in a legitimate long-term relationship.

• Caesar is just as funny and nice in person as he is on the show. Also, “he is a GREAT nail tech (and pedicurist).”

• Maria DID NOT want to be on the show at all. However, she eventually conceded to partake in part (which looks to just be telephone calls) for Caesar’s sake. Also, Maria isn’t any more a catfish than anyone else on social media. Essentially, she’s just good with “filters and angles and stuff.” Caesar was well aware of what Maria was really like, and producers were merely playing up the catfish angle because of Maria’s refusal to film.

• Caeasar’s main motivation for doing the show was to build up his acting resume. He didn’t get paid much, as we already knew about Before the 90 Days first-time cast members. The previous amount we have heard was $1,000 per episode, but the redditor mentions $1,200 per episode. It seems entirely reasonable that the cast would be getting paid more now. (I’ve stated many times before that they are SERIOUSLY underpaid, especially considering that the foreigner usually does not get paid.)

• The relationship between Caesar and Maria had “minimal to no drama,” so producers did a lot of reshoots and nudging to spice things up. Caesar was more than happy to seize the opportunity to show off his acting skills and he “hammed it all up.” The redditor adds that “his tears are fake every time.”

• As far as the chocolate panties, the redditor didn’t have any specific information on that. “My money is on the producers telling him to bring it tbh,” she wrote. “He is really not a super pathetic guy lol.”

• So, did Caesar and Maria ever actually meet in person? “From what I REMEMBER, he didn’t meet her in person, but also wasn’t expecting to by the time they were filming.”

Here is the actual reddit post — you will have to check out the comments for most of the tea.

UPDATE – It was requested by the user that I remove the embed, so here’s the link.

When I initially vetted Caesar just after the first preview trailer dropped, I found that he has an Explore Talent acting and modeling profile. There are a few photos on the profile, but very little information aside from a physical description. 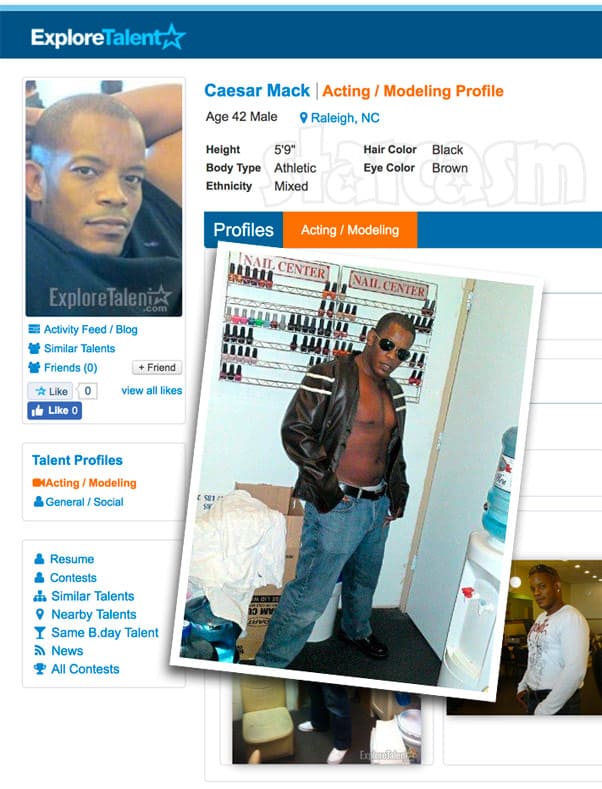 There is a section in which Caesar has listed what types of casting calls and auditions he is most interested in, and they are basically a mix between different kinds of acting and modeling jobs.

UPDATE – Does Caesar have a child? Someone in his small apartment apparently does!

Things apparently do not work out with Maria this season, but I think Caesar will end up winning fans over as they end up pulling for him by season’s end. I know I’m a fan already! Of course, the chocolate panties thing could be a true empathy killer.

I also want to point out that Caesar and Maria are the only Season 3 couple who haven’t been seen in any photos or videos together, which would further suggest that perhaps they never actually met up in person.

Plus, if everything that the redditor claims is true, and Caesar and Maria were never actually going to meet up, then it would make perfect sense to change the locale to Mexico because it would be a lot less expensive and complicated production-wise to fly Caesar there and have him stood up than Ukraine. Could it be that Maria’s point about the weather being horrible in Ukraine actually came up first in a production meeting?

Who knows, perhaps Caesar learned a trick from Tricky Ricky and had a back up girl lined up!

To find out exactly what happened (or at least exactly what was filmed), be sure to tune in to 90 Day Fiance: Before the 90 Days airing Sunday nights at 8/7c on TLC!

Oh, and since it looks as though Maria is indeed real, I felt I should swap out the catfish from his and Maria’s cast photos that I created just after the trailer was released: 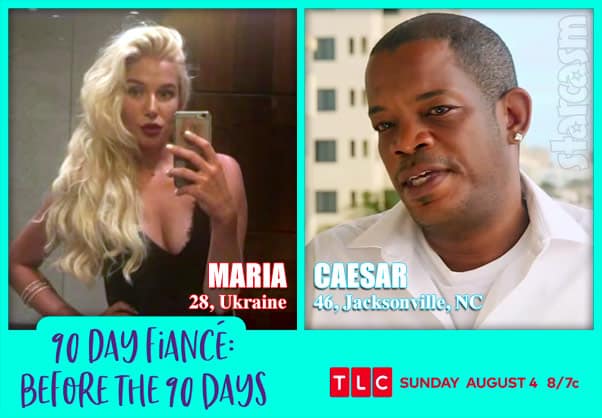 Artis and Jess: The strangest Catfish yet?

BEFORE THE 90 DAYS Are Paul and Karine coming to the US together?