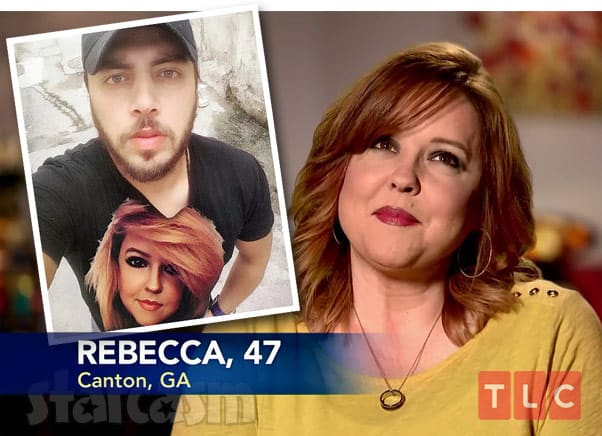 As we previously reported, Rebecca filed for divorce from her third husband on May 9 of this year, after more than five-and-a-half years of marriage. According to court records, the divorce was officially finalized on July 9.

The divorce filing indicates that Rebecca and her ex-husband separated on January 4, 2018. They have no children together, and it appears as though the divorce was uncontested. Rebecca’s ex is currently still in Georgia, but living in another county.

On the Before the 90 Days Season 3 Premiere, it is revealed that Rebecca married her ex in Morocco and then brought him to the United States on a spousal visa, which is different than the K-1 visa that fans of the show are more familiar with. I assume, given the length of his marriage to Rebecca, that her ex will not have any issue remaining in the United States after the divorce.

If you’re curious about Rebecca’s previous marriages, we included a detailed timeline in our previous post. Here is a bullet point recap:

We saw in the preview trailer that Zied did not take the news about Rebecca still being married very well, but was it a relationship deal breaker? Are Rebecca and Zied still together? You’ll have to tune in to 90 Day Fiance: Before the 90 Days Sunday nights at 8/7c on TLC to find out! Unless we find out first! 😉

Want to hook an online hottie? Choose your filters wisely. ?Tune in to the season premiere of #90DayFiance: Before the 90 Days, Sunday 8/7c!