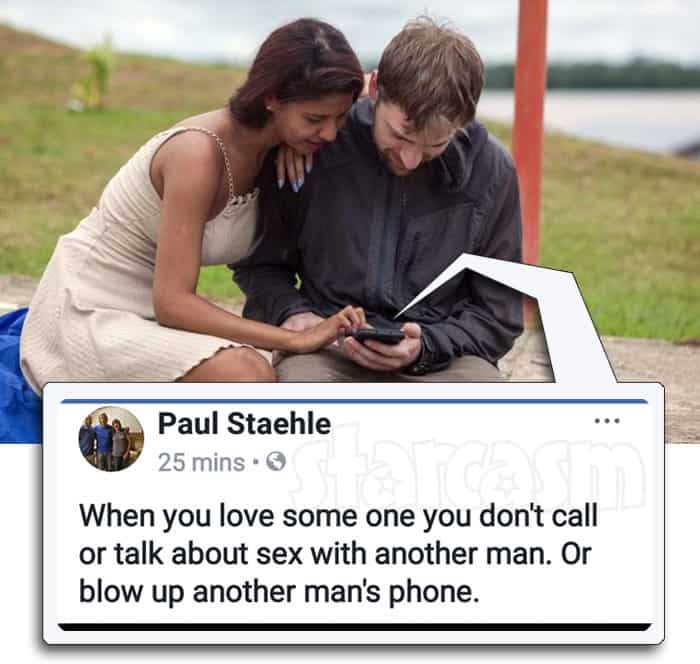 It appears that the “fierytale” ? romance between Before the 90 Days couple Paul Staehle and Karine Martins may have come to an abrupt halt amid cheating allegations.

The startling news broke via Paul’s Facebook page earlier today when he shared a photo of Karine’s phone with information about a contact named “Alex.” Paul, who is currently in Brazil, captioned the photo by writing: “When you love some one you don’t call or talk about sex with another man. Or blow up another man’s phone.” Paul added in the comments: “Karine told me i am bad and she loves Alex.” 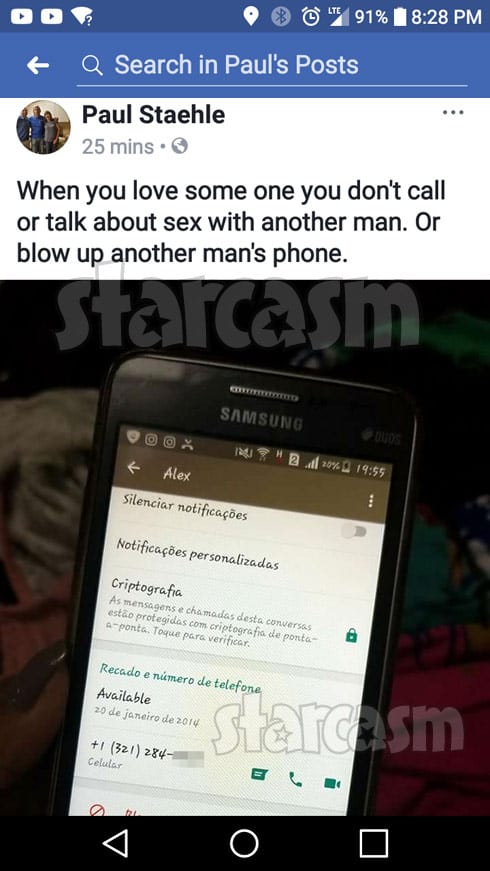 Meanwhile, on Karine’s Instagram page, she posted the following in Portuguese (with the English translation from Google):

I think in the past a very bad person has hurt Paul’s feeling that even I can not help him. I tried. Not for interests. But for finding a Paul a good person. God knows what is best for each person.

Soon after Paul’s posts, both he and Karine deleted their Facebook profiles. It’s unclear if that was for personal reasons, or because of show producers — who have scolded Paul before about posting spoilers on social media.

At this point, we do not know anything about this “Alex” person. It is interesting to note that the phone number has a Florida area code, so I assume it is not someone that Karine sees often (or at all) in person. Also interesting is the fact that the date listed on the contact is January, 2014. Prior to deleting his Facebook profile (again), Paul addressed the date issue when asked about it in the comments section. “Just date of the status,” he explained. “I caught them talking again today,” he added.

I exercised the skills I have learned from watching too many episodes of Catfish, and there were a few names that matched up with the phone number in the photo — including someone named Alexandria. Wait, what?! Could it be that Paul has overreacted to Karine talking with a female friend? Online phone records are notoriously unreliable, so I would have no confidence jumping to any sort of conclusion like that. It was odd though that one of only three names that turned up being associated with that number was Alexandria.

Also, I enhanced the photo and it is clear that the person holding the phone is a woman. I can’t quite piece together the narrative where Karine would be holding her phone with Alex’s contact info so Paul could snap a picture and angrily post about it on Facebook. Perhaps Paul has made a female friend in Brazil that was willing to assist? 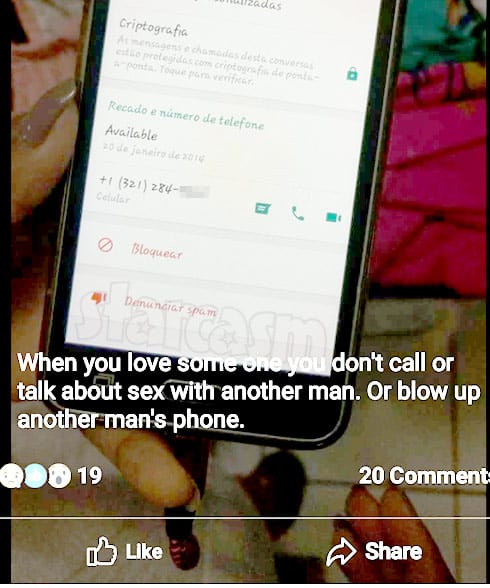 We will continue to monitor social media for Paul’s return, or for any other clues about Alex, and will update if we find out anything more.

UPDATE – I was just checking some fan groups for the show and a few people have actually called and/or texted the number posted by Paul! The calls went to automated voicemail, and there have been no responses to the text messages. (According to the posters in the groups.)

I will wrap up this post with our custom-made poop water animated gif, which may be symbolic of Paul’s relationship status right now: