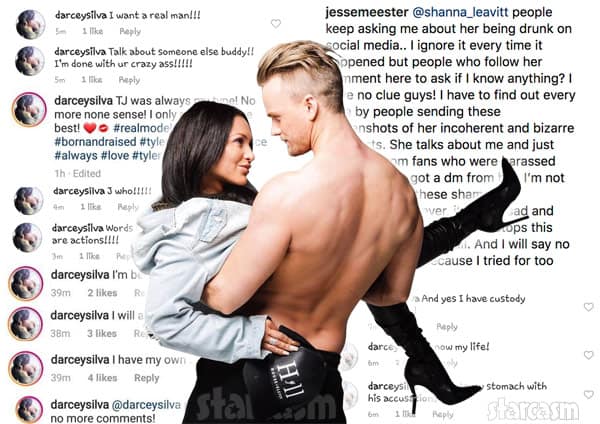 Before the 90 Days twin flames Darcey Silva and Jesse Meester are keeping their eternal flames burning in the form of yet another petty dumpster fire of rambling (and seemingly inebriated) Instagram comments by Darcey, and yet another judgmental above-the-fray response from Jesse.

The latest incident went down early in the AM on Tuesday as Darcey posted a zoomed-in photo of a young man that looked to have been clipped from a Vogue ad for turtleneck sweaters. “That’s my type!” Darcey captioned the image. “So keep talking!!! ❤️” 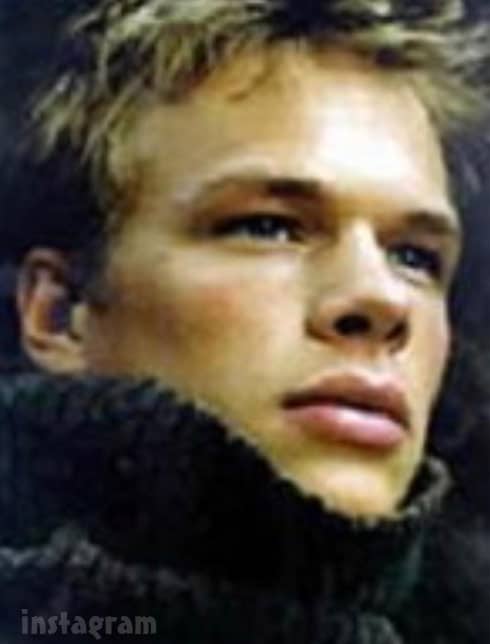 After posting the photo, Darcey’s thumbs went wild in the comments section as she revealed her undying love for some guy named Tyler, in addition to throwing Jesse under the bus. I’ve tried to archive all of Darcey’s rantings for posterity, but these were posted and deleted relatively quickly in the wee hours of the morning, so all I have to go on are screen caps from various sources:

If a man loves a woman it will be known!!

This is my love from my heart!

I have nothing else to say

I miss you Tyler! I will never forget you!

And yes I have custody of my kids!

I know my life!

I’m sick to my stomach with his accusations

I’m disgusted with him!

Talk about someone else buddy!! I’m done with ur crazy ass!!!!!

Words are words! Actions are actions!!!!

I will always tell the truth

Darcey also posted a video clip that appears to be of a woman sitting outside in the dark. Darcey captioned it by pointing out a lack of bush, and her Before the 90 Days co-star Paul Staehle offered up his approval before the clip was deleted. I haen’t seen the actual video, but here is a cap of the post: 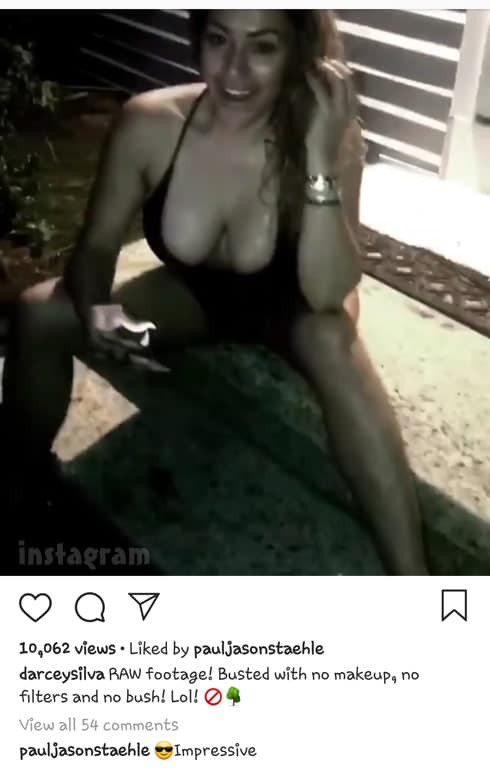 Darcey would return to Instagram Tuesday afternoon, and she seemed to be able to better organize her thoughts as she talked about the “King” that she is expecting to enter her life: 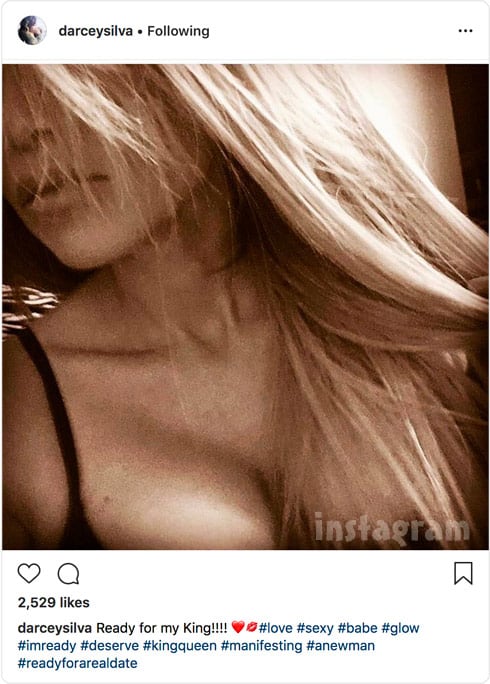 DARCEY: love you darling! I’m ready to only manifest greatness! Thoughts become things! Only thinking the good ones!!! I know and feel in my heart my King is coming soon! ❤️?

COMMENT: I RESPECT you SO much!! I know we only see a few min and its all pieced together in a way that will make TLC the most money- drama sells. I respect you because he’s done several interviews (podcasts etc..) and always has such negative things to say about you (dims your light to brighten his) he’ll comment negative things about you etc and you never do- in spite of all he does, you still keep it classy- comments and thats very honorable.

DARCEY: thank you for acknowledging this and sharing your heart with me too! It’s sad and very disrespectful he needs to say such false things and make all false accusations to make himself feel and look better! I can not and will not ever trust a man who treats someone like that! Everyone in our lives knows the truth so I just rise above all the negativity and made up drama he spews! That’s not love it’s hate! I choose positivity so good karma in my life and love life so only here staying strong, beautiful and positive for me and my kids and family my loves! Keeping it real and classy! Love you all! Thank you for your love and support! ?❤️

COMMENT: did you notice everything he accused you of doing was exactly what he was doing?!!!

DARCEY: it’s disgusting how he chooses to shame me and make up false claims and accusations to satisfy himself! That’s not maturity! I’m tired of him talking falsely about me and my life and family.

COMMENT: Are you doing ok today? What happened to set you off to make those posts? It seemed like something specific happened to get you so upset. **referencing the posts from last night that were deleted

DARCEY: nope was just sharing my heart as usual! I’m here to tell my story too! So I will tell my true and not let someone lie about me and make me look like a fool!

COMMENT: Ohhhhh girl…. I’m so proud you broke away…. I’ve been and still going through my brake up….seeing you brought how badly they make you think you are…. Girl… I use to hope you both would make it…. but he really is a sick individual….. for a man that hates social media(btw .. not) his fingers sure are a typing…. you did the best thing you’ll ever do for you and you babies…. get ready girl God is bringing someone 10the man…. blessings

DARCEY: love you baby doll!!! He won’t slow my roll! I’m disgusted with his behavior towards me and my family! Not how a real man show act! So disrespectful! And took him all over the USA last Xmas vacation! Florida and DC etc…. I’m sick to my stomach how a man can not even appreciate what I did for him! It’s like a slap in the face! I’ve always been a giver! But this felt like the worst relationship ever! Finally followed my gut and womanly intuitions! I deserve better! Not someone I feel taken advantage of.

If you are curious about the timeline, Darcey and Jesse were together in New York City in September of last year, and I assume that was when they filmed the Before the 90 Days episodes we have seen thus far (as well as last season’s Tell All). Jesse returned to the US in December, and he visited New York City, Washington, DC, and Florida. That must be the return trip he talked about in the recent preview, during which he planned to tell Darcey that their relationship was over. I guess it took him a while to break the news?

But, back to the recent drama. As you might imagine, Jesse Meester’s inbox and social media pages were flooded with messages and screen caps of Darcey’s late night ramblings, and he offered up this response to one commenter:

COMMENT: So does anybody know why Darcey went mental at 2am (EST) and made two posts of rambling, incoherent, crazy nonsense about Jesse? They were both under photos of some guy she supposedly dated in the 90’s. It appeared that she was coming unglued and she was accusing Jesse of talking smack about her but I have not seen him even utter her name. I would bet she was highly intoxicated, judging by the insanity of the posts. She ended up deleting them. Man she is someone who canNOT handle being in the public eye. She is consumed by others’ opinions of her, obsessed with her appearance, in utter denial over the fact that she is in her mid-forties, and completely oblivious to the fact that 90% of the photographs she posts are *highly* inappropriate, probably not something her young, impressionable daughters want to see, and scream of desperation. Honestly, it appears she is coming undone. I’m humiliated *for* her and it’s just plain sad to see.

JESSE: people keep asking me about her being drunk on social media.. I ignore it every time it happened but people who follow her comment here to ask if I know anything? I have no clue guys! I have to find out every time by people sending these screenshots of her incoherent and bizarre outbursts. She talks about me and just got dm’s from fans who were harassed and randomly got a dm from her. I’m not even exposing these shameless comments. However, it is very sad and scary. I just pray to God she stops this and gets help. That’s all. And I will say no more about this because I tried for too long.

OK, I think that should get everyone all caught up on the latest Jesse and Darcey drama! To see Jesse’s US East Coast Darcey Break Up Tour, be sure to tune in to new episodes of Before the 90 Days airing Sunday nights at 87c on TLC!