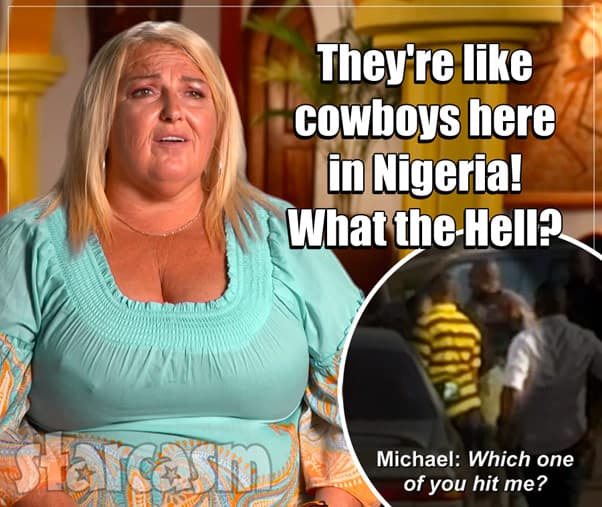 On tonight’s episode of 90 Day Fiance: Before the 90 Days, Michael and Angela are leaving the airport in Lagos, Nigeria when they get involved in some sort of incident involving a tow truck. The next thing you know, both Michael and Angela are out of the car and swinging at a group of strangers as airport security intervenes! So what in the world happened?!

Judging from the footage aired on the episode, it appears as though Michael and Angela were the target of an airport towing scam. Michael was driving when a vehicle in front of him came to a stop. “We gotta wait on them,” Angela is heard saying, after lighting up a cigarette.

As they are at a standstill for a very brief period of time in what turns out to be a no parking zone, a rather haggard looking makeshift tow truck passes them on the left. The passenger door is open as a man leans out ready to pounce. Within seconds, the man is out and has placed metal spikes around Michael’s tires preventing him from moving his car.

The tow truck looks to be carrying at least four men, and soon all of them — plus Michael and Angela — are on the roadside where blows appear to be exchanged.

“You stop hitting him!” Angela can be heard amid the sounds of a scuffle off camera. “Which one of you hit me?” Michael exclaims.

The TLC camera crew can be seen approaching from another vehicle, and you can also see what appears to be an airport security officer present with some sort of large gun.

Viewers are shown the following message:

Airport security broke up the fight and the tow truck drivers agreed to release Michael’s car.

I did a little research based on the “FAAN” logo on the “tow truck” door, and it was VERY easy to find numerous articles about the tow truck scammers at the Lagos, Nigeria airport. “The Murtala Muhammed International Airport Road has become a money-making venture for FAAN traffic officials who patrol with their towing vans in search for a prey to be extorted and this they do on a daily basis unchecked by the FAAN authorities,” reports Punch in June of 2016.

The corruption is a relatively recent problem, and only began once the airport began outsourcing the job to other companies in the 2000s.

Here is a description of how things used to work from a 2018 article in The Sun about the current state of corruption:

The vehicle towing services therefore was to ease vehicular traffic along the roads leading to the domestic and international terminals of the Lagos airport as well as within the two airport terminals, by towing any broken-down or spoilt vehicles that obstructed traffic flow to a place where the owner could get it fixed. It was also to tow any vehicle that had been abandoned by its owner or wrongly parked in such a way that it obstructs traffic. However, where such vehicles still had its drivers inside as at the time the operators of the towing-trucks arrive, they were politely asked to move their vehicles to allow smooth traffic flow. Only cars that were abandoned and whose owners could not be found and those that resisted orders to move their cars that were towed. A fine was usually imposed on such defaulters to serve as a deterrent to them and others. Indeed, at the early stage of the agency or unit (in the 90s), it was an agency admired and applauded by airport users.

“Once they see a car that is slowing down or stationary or veers off into any of the bus stops within the airport, they quickly overtake it and clamp down the tyres and get it towed,” driver Mark Otu told The Sun. “They will then slam you a fine that ranges from N10,000 to N15,000. Sometimes they start with N25,000.”

Mark recounted a time when he fell victim to a tow truck crew. “You could see the hunger and the desperation in them to get you pay something, even if it is N5,000. It became too obvious to me that the major aim is not to take out vehicles that clog traffic, but rather to generate revenue. And it is this new inordinate drive for revenue that makes this agency act in the most horrible and shameful manner.”

EXCLUSIVE! #90DayFiance #BeforeThe90Days star Angela Deem was arrested for DUI last week, and as you might imagine, she did not go quietly. See her mug shot photo and get the details from the arrest report: https://t.co/bVYFst0L0h

Another driver named Eze shared his experience with The Sun, and it was almost identical to the Michael and Angela incident:

“They blocked my car and wanted to tow it and I demanded to know why and they said I was driving on an illegal route. But I knew I wasn’t. They acted like hungry lions released from a cage to hunt for prey,” said Eze.

“When I told them that that part of the airport premises was neither a terminal building nor the Airport Road and that I obstructed no traffic, they became very temperamental and wanted to beat me up. They knew they were wrong. But I sensed that they wanted to intimidate me and extort money from me. When I prevented them from towing my car, one of them called me aside and asked for bribe. He said I should pay them N5,000 and that if they towed my car to their garage, it would be difficult for me to prove any case against them, and that I would pay more.

“It was only when others who watched the scene came closer and spoke on my behalf that they let me go. It was this same conduct among Vehicle Inspection Officers that led to their ban in Lagos. Because the image of the Lagos airport is badly damaged by the action of these people, it has become important for relevant regulatory agencies to step in speedily and get this unit reformed.”

It’s great that Michael’s balls dropped and he was willing and able to fight to protect himself against the shady actions of the tow driver, but I genuinely don’t think it would have done much good if the TLC camera crew wasn’t there. That is some seriously terrifying stuff!

The Sun article, which was published in January of 2018, concludes by pointing out that the Lagos airport is the only one in Nigeria that engaged in such nefarious towing activities.

“It is high time the FAAN management curbed the excesses of these men,” Punch wrote in the article linked above, “taught them the right thing and put their activities under serious checks because they are painting Nigeria in a bad image as this route is the first point of contacts to foreigners who visit this country.”

Until that happens, if you are flying into Nigeria, I strongly recommend you avoid the airport in Lagos if you plan to drive!

To see the entire incident play out on screen, be sure to tune in to 90 Day Fiance: Before the 90 Days tonight at 8/7c on TLC! And just in case Angela and Michael getting into fisticuffs with Nigerian tow truck scammers isn’t enough of a reason to tune in, you will also get to see Michael handcuffed and wearing Donald Trump boxers as Angela licks body paint off of him (and vice versa). 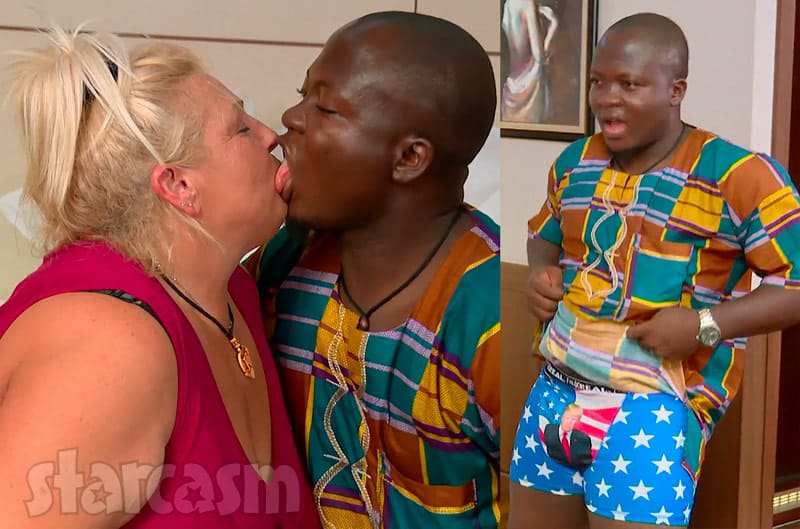 BEFORE THE 90 DAYS Angela Deem’s DUI arrest was 2 hours after her male companion was arrested for DUI!