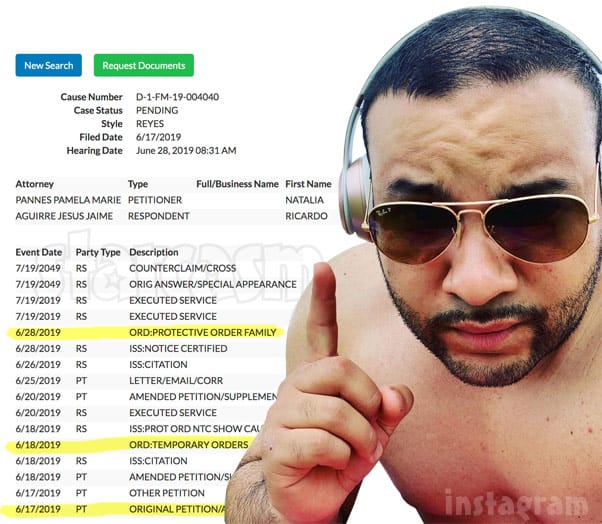 Numerous 90 Day Fiance: Before the 90 Days fans were shocked to find out that Season 2 star Ricky Reyes was still married when he ventured to Colombia to date Melissa and then Ximena — the latter of which he eventually proposed to. And it may shock fans to know that even after all of Ricky’s ridiculous antics on screen, he and his wife Natalia are still legally married. However, it appears that won’t be the case for very long as Natalia officially filed for divorce last month, which included a protective order preventing Ricky from seeing their young daughter Kira.

According to online records, initially posted by 90 Day Fiance social media mogul John Yates, Natalia filed for divorce on June 17. The filing included the temporary protective order, which was signed by a judge on June 28.

“Yates shut your crack head meth ugly ass up,” Ricky wrote over a screen shot of his motion posted to his Instagram stories. “Probably how ur crackhead cat died,” he continued — referencing the passing of John Yates’ cat Prue earlier this month. After his rather harsh intro, Ricky explained a little bit about what happened. “This is called default judgment because I did not have an attorney.” He then took the opportunity to once again share his unfavorable take on people associated with the show launching GoFundMe campaigns. “I don’t GFM for this sh*t like your meth head ass… know the facts first.”

In a separate bit of text, Ricky wrote: “Now I have an attorney to fight for my kid.”

An excerpt from Ricky’s motion: 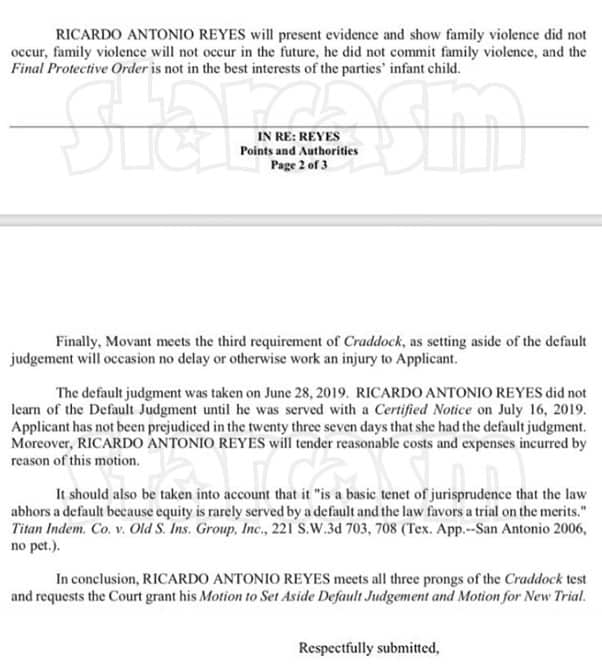 In the filing, it is revealed that Ricky must have been accused of “family violence,” which he denies. The motion also states that Ricky was unaware of the initial court hearing, a claim that appears to be corroborated by the fact that Ricky was not officially served until mid-July. (Ricky’s filing states that he was served on July 16, while Travis County court records indicate that service was executed on July 19.)

Despite not being served until earlier this month, Ricky has been very public about not being able to see his daughter Kira over the last couple months. Here is a timeline of his captions for Instagram photos he has posted of his daughter during that time:

July 22: You are heartless to do this. I miss her so damn much, I try my best to keep all my emotions in this little box in my mind and lock it away, but sometimes the box opens a little and that little fills my heart with tears and pain.

July 1: Week 8 / nothing …. unbelievable. I pray God can answer my prayers and let her know that I love her, hopefully she can feel it at least spiritually. #fightforyourdaughter

John Yates later offered up his rebuttal to Ricky’s post, which has a similarly bitter tone:

Oh and f**kface just so you know you could have appeared in court and plead your case to the judge if she was soo off base by getting a restraining order against you. Instead you chose to not appear rip your wife in a million pieces on social media and claiming she’s the bad guy. Well you better believe I have forwarded all your nasty behavior to people who decide on what’s right.

“Let’s do a checklist,” John continued in the comments of his own post. “You lied to TLC, Sharp, Melissa, Ximena, your ex wife, Katie, Danielle, and pretty much everyone you’ve ever known. But sure Jan it’s our riproaring meth use that made a judge grant a restraining order against from you seeing your wife and kids. How much sh*t are we expected to believe?”

Ricky denies that he was responsible for any sort of “family violence” in the motion, but he has suggested many times over the past four months that he’s done things he regrets — including his appearance on 90 Day Fiance: Before the 90 Days. Back in March, everything seemed to be going well for Ricky after he quit drinking and smoking and began to focus on his health.

However, just a day after posting a positive update about his progress, Ricky checked himself into a mental health facility. “Officially lost it, my will and strength,” Ricky wrote the day he checked in. “Will be gone for [a] couple of days…I’m upset at myself for losing composure…Need to make finer adjustments…Bye.” The post was accompanied by a cover of the Trent Reznor song “Hurt.”

Ricky would later issue apologies to his wife Natalie and his former fiancée Ximena, although neither appeared to be very receptive to his contrition. “Delete that photo,” Ximena responded in the comments of his post. “I’m getting tired of your immaturity and desire to be noticed and appreciated and no one believes in your lies loser.”

On July 12, Ricky opened up a little more about his mental health issues with a lengthy post on Instagram that included a gym selfie:

1 hour on the stair master …. warm up is done. Time for training. Nothing falls on your lap, and people want to see you lethargic, slow, obese and a train wreck, people love seeing other people fail in order to make their lives a bit more bearable; I don’t (for the exception of meth Dracula ?‍♂️ f**k him). For those that are depressed, heart broken, unmotivated, and for those that suffer from confidence I say to you that I relate. I say to you, that these feelings are VERY real and it’s not as easy as someone saying to you “get over it”, “ stop being weak”, these feelings drown your very essence of your existence. I don’t know the answer, but one thing that is working for me is to continue to move forward (no matter how much it hurts and no matter how much ur mind fights it), never stay complacent and have a support system. I love love looooove that some of y’all talk to me via DMs and share ur story, I feel like I’m not alone in this brutal world, I also appreciate the f**k of @tarik_myers, this man has giving me advice like an older brother (he really does remind me of AnthonyBourdain ), mental health is real, and I’m fighting it together with y’all. Thank you ?.

Ricky’s wife Natalia has stayed off of social media almost entirely since Ricky’s appearance on the show. Here is an excerpt from our profile post about Ricky published right around the time of his first Before the 90 Days episode in August of last year:

It appears as though his wife (and mother of his youngest daughter Kira?) was born in Russia. Ricky referenced his wife often on his Facebook page, including numerous photos, right up until August of 2017, but she has since completely ghosted Facebook. I could not find a trace of her on other social media platforms either.

However, I found a LinkedIn profile that appears to be hers that may explain why Ricky relocated to Texas. That profile says she worked at a bank in Columbus, Ohio up until June of this year when she listed a new job at a bank in Austin, Texas. I assume Ricky followed her there so that he could remain close to his youngest daughter Kira, but that is purely speculation.

#90DayFiance #BeforeThe90Days Ricky pens lengthy apology to ex-fiancée Ximena and his wife, but Ximena is having NONE OF IT. Plus, Ricky goes off on all the cast members launching GoFundMe campaigns without offering any product or service in return. https://t.co/qRwtTGWwG2

We will continue to monitor the divorce case and will be sure to update if there are any major developments.