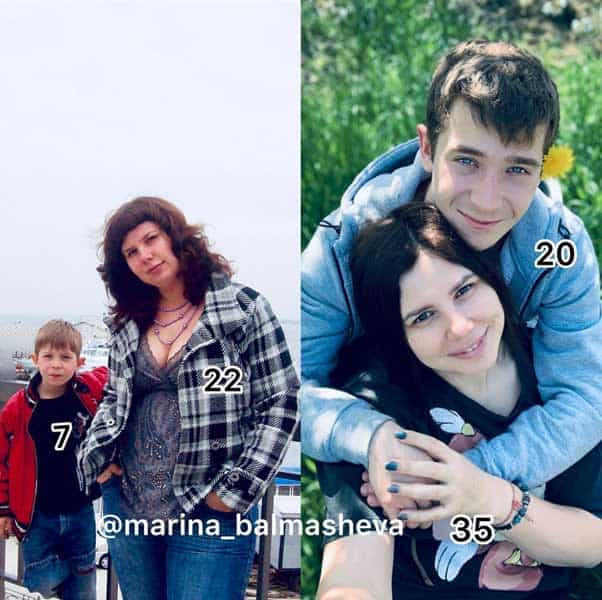 Marina Balmasheva, a Russian 35-year-old influencer, has shocked the world with news that she’s in a relationship with, and plans to marry her stepson after raising him when he was a young boy. She’s shared multiple photos of herself with her stepson, but the boldest was a side-by-side of herself with Vladimir when he was only 7-years-old, next to a photo of them now, as a romantic couple.

Marina is a social media influencer with an audience of over 400k Instagram followers, which she obtained mostly by sharing a weight loss journey of losing 163 lbs. Now she’s sharing a journey of an entirely different kind.

Marina was in a relationship with Vladimir’s father Alexey Shavyrin (45) for 10 years, and legally adopted five of his children, all except Vladimider, who is the oldest child. Three of his siblings are still minors and Marina and Vladimir are currently raising those three children in quite an unconventional family situation. If Marina and Vladimir follow through with their plans to get married, Marina will be both their mother and their sister-in-law. Marina has told the Russian media that she also plans to have children with Vladimir.

Marina and Alexey have only very recently divorced after he caught her having a secret affair with his son. Alexey talked about the situation to talk show Pryamoy Efir, saying that he only found out this was going on this March.

“I could not fall asleep one night when I heard them having sex,” he said. “Then I understood that Marina was cheating on me with my son. A few minutes later she just came and lay down next to me. I didn’t tell her a word that night.” He waited a few weeks before confronting his wife about what he heard that night, but after he did they got a swift divorce.

Of course, Marina is getting slammed with criticism in the comment section of her posts with reactions of outrage, confusion, and moral condemnation. Even people who are more accepting of someone marrying their former stepson or stepdaughter are seeing an issue with doing is if you helped take care of them from a young age. This type of relationship could be categorized as sexual grooming. Still, all this negative attention is not deterring her from continuing to share her shocking relationship online.

“You never know how life will turn out and when you will meet a person who makes you smile,” she captioned a recent post. “I know that some will judge us, others will support us, but we are happy and wish you to be as well.”