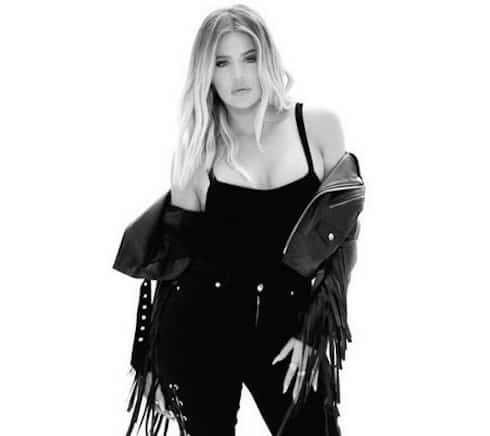 We’re still very early in the publicity gestation cycle of Khloe Kardashian’s pregnancy. Right now, all we know for sure is that she’s pregnant and boyfriend Tristan Thompson is the father–but there’s still so much for the family to roll out, from baby bump photo teases to the actual Khloe Kardashian baby bump photos to honing in on her due date to getting ready for a trip to the hospital ahead of time to the actual birth. And that’s not even counting the publication of the first official baby photo, which is pretty much an industry unto itself.

Anyway, this week we’ve already been treated to speculation over whether Khloe plans to induce labor during the NBA All-Star Game, because the league takes a whole week off for the game and Tristan will already be chilling at his new home in LA anyway. But yesterday, thanks to a run-of-the-mill Instagram update featuring Khloe repping some new items for her Good American denim line, fans and tabloids alike are convinced that they’ve inadvertantly witnessed the first Khloe Kardashian baby bump photos.

First of all, here’s the pic in question:

❥ ? JUST DROPPED!! One of my favorite minis!! The sexiest waxed leather-like @goodamerican denim!! You'll be rocking these all season long ladies ??? Get yours now on goodamerican.com #GoodSquad #GoodAmerican ❥ ?

I guess there’s kind of a bump there, assuming you squint and don’t breathe too hard? It’s also hard to tell whether the bump is just the shading in the rather dark image. Khloe’s also been repping her own weight loss hard over the last few months, so any “addition” to her waistline, no matter how minimal or imagined, was bound to get attention.

Anyway, The Sun ran with the gossip, as did Metro and Cosmopolitan. And, as you no doubt guessed, the vast majority of the 6,000+ comments on the three photos are some variant of the phrase “Is that a baby bump I see?” But it’s also possible that Khloe is just trolling her 69.3 million followers with a little cat-and-mouse game–and it wouldn’t even be the first time this week that a Kardashian higher-up had done so.

Perez Hilton moves from Miley to Momsen with inappropriate tweets

Which songs will Lady GaGa and Elton John duet at the 2010 Grammys?