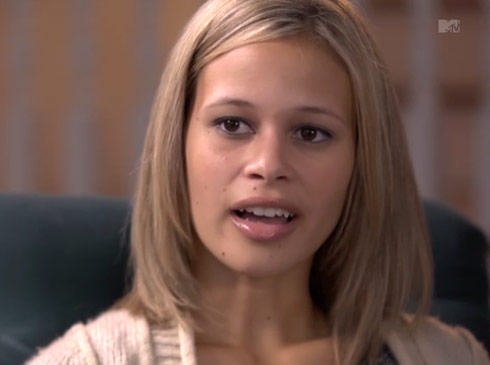 The last installment of 16 & Pregnant featured the volatile relationship between mother of twin boys Jennifer Del Rio and her baby-daddy Josh Smith. Since the taping of the episode the two have been at each other and in the headlines going as far as having Josh’s bloodied face show up on TMZ.

During the After Show Jennifer was asked a number of questions from host Alaina Huffman including what everyone wants to know, “Are you guys back together now?”  Jennifer stated that:

“Kind of, I mean we’re civil.  Things are much better, he’s taking classes and he’s learned alot about the kids.  He’s still learning how to be a dad because he wasn’t there so now it’s just beginning.  So we’re just trying to kind of take it slow.”

Huffman followed up by asking, “So after all of that, you said he scared you really bad and there was a little bit of violence.  What is it that you feel?  Do you have faith in him that it won’t happen again?”

“I feel like it won’t happen again but you know I don’t know that.  It has to be up to him to say he’s not going to let that happen again and he’s going to change.  It’s up to him.”

Well we all know that another violent outburst happened since then with Josh claiming he was struck while Jennifer argued that he hit himself to set her up.  Jennifer went on to state in the interview that Josh was a good daddy and that she still loved him and that she’s always going to because he’s her kid’s dad.

Del Rio has an Official Fan Page on Facebook that has been up, shut-down and back up since the latest altercation.  She’s made it clear that she isn’t going to use that forum to bash Josh and would probably be well advised to not do so.  She hasn’t commented too much lately but she did answer the big question about her and Josh’s status when asked.  Here it is:

N-o, no is the answer and as of yesterday is the status.  Jennifer and Josh share two beautiful little baby boys and I hope that the decisions they make from here on out focus on that.  It has to be hard when you combine the passion of young love and the emotions of having not one but two babies together when navigating a relationship.

Here is the complete After Show:

Lindsay Lohan avoids jail and can drink all she wants now