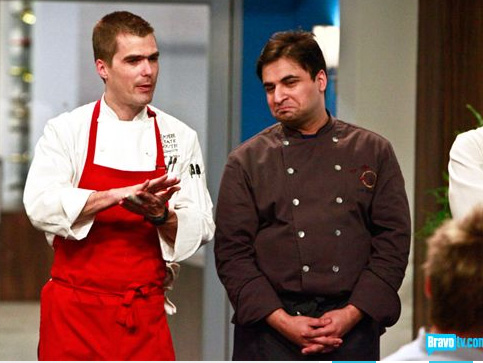 Chef Suvir Saran is a “visionary and his integrity will take him very far”, at least according to Chef Traci Des Jardins; but it won’t take him any further this season on Top Chef Masters. In the Biggest Loser challenge, the chefs were asked to transform the high calorie foods that Biggest Loser Season 11 contestants crave into tasty low-calorie alternatives. Suvir was assigned Irene’ Alvarado’s favorite, a Bacon Cheeseburger; but, instead he gave her a veggie patty on a dry pita pocket, some julienned veggies, and a lecture.

It turns out that Chef Saran’s culinary point of view identifies red meat with the devil. (They are, after all, the same color.) His conscience wouldn’t let him serve beef on an episode devoted to healthy eating, and his ego wouldn’t allow him to serve anything without a generous helping of judgmental lecturing. The timing was particularly annoying to Chef Hugh Acheson who had to present his roast beef dish for Austin Andrews immediately after Suvir’s anti-meat tirade. The only bonus in that awkward moment of the show was seeing the dashing host, Curtis Stone, look a little uncomfortable. I wonder if that has ever happened to him before?

It is sad to see Suvir go, though. No one else on Top Chef Masters 3 can compete with his sound bites. In his video bio, he lists his reasons for coming on the show: “(a) to make fun of myself, to be ridiculed, to be tortured, to be tormented; and (b)to see what it is that makes people want to be bashed publically and on camera; and (c) to make money for my charity, ASA (Agriculture Stewardship Association.) “

Let’s hope Suvir hasn’t had enough ridicule, torture, and torment. Priggish lectures on carnivorousness aside, it would be a shame to think that we’ve seen the last of him.