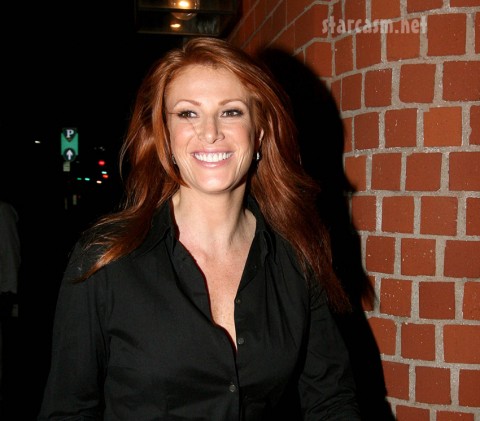 Life and Style is reporting that Angie Everhart gave birth to her first child late Friday night. The 8 lb. 4.9 oz boy, named Kayden Bobby Everhart, is healthy and will be raised by Angie as a single parent. Kayden’s middle name, Bobby, comes from Angie’s father Bob.

“The dad is very nice and he’s very excited about it, but we are not a couple. It’s nobody you know.”

Angie was supposedly filming a reality show chronicling the ups and downs of raising a baby alone called Angie Baby but nothing has been heard about the show for a while.

It’s probably a smart move on Angie’s part to be a single parent because her previous romantic forrays didn’t work out too well. The tall, staueque model dated Joe Pesci, who is 20 years older than Everhart, for seven years before that relationship went bust. The unlikely couple got engaged in 2007, broke up in April 2008 and were spotted together again around September 2008, but that didn’t lead anywhere.

After Angie broke up with Pesci in April ’08, she briefly dated Chad Stansbury. That romance died after Everhart called the police because he was abusing her. Angie has also been linked with Howard Stern in between his marriages. Wow, Angie certainly picks ’em.

Hopefully things are now looking up with the new baby. Angie can worry about relationships later.

PHOTOS Anna and Josh Duggar welcome baby No. 4 — find out her M-name