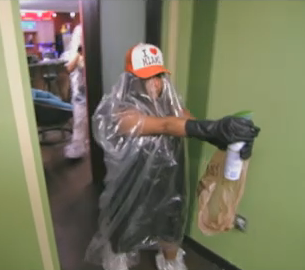 This June Jersey Shore creator (and fellow Jersey Girl) SallyAnn Salsano outed the cast as “herpes nest” and joked that they handed out herpes medication Valtrex like “M&Ms.”

She was participating in a panel discussion of reality show producers hosted by The Hollywood Reporter.

Here’s the context of her comments:

SallyAnn Salsano: “I do a full medical (for cast members), but I also do a lot of STD stuff.”

Celebrity Rehab’s Dr. Drew Pinksy: “The network (VH1) requires me to do stuff with my patients that has no relevance to anything. Like everyone on the set has to take (herpes medication) Valtrex.”

SallyAnn: “We hand it out like M&Ms. ‘Hey kids, it’s time for Valtrex!’ It’s like a herpes nest. They’re all in there mixing it up.”

Of course this was an exaggeration for comedic effect, but that doesn’t mean the cast isn’t taking Valtrex. Hollyscoop asked several of them, and got no straight denial about the herpes status of the cast.

The Situation responded: “Really? I did not even hear that. What set was this? I wasn’t passed out anything. What story was that?As far as I know, being one of the main characters on the show, nothing like that happens. Maybe it was something taken out of context.”

Ronnie: “It is what it is. People make mistakes and say things they don’t mean.”

With all the drunken smushing going on, the cast may not be entirely pristine and STD-free. Below is a clip of Snooki and Sammi cleaning up what is called the “smushing room” where the boys take multiple girls for smushing activities. They find condoms, so at least some of the smushing is protected.

Is Khloe Kardashian dating James Harden…or is she back with Lamar Odom?