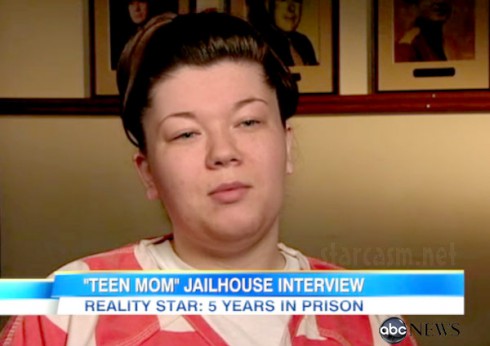 Just one day after Amber Portwood was ordered to serve out the remainder of her five-year prison sentence for a felony drug conviction, ABC News sat down with the 22-year-old former Teen Mom star for an exclusive interview in which Amber talked about her decision to return to prison and forgo further treatment in a drug program, and just how bad her addiction had gotten.

“I felt like I’d rather do my time and get it over with and make the best out of the situation that’s been handed to me,” she tells Juju Chang. “I was very depressed. I was alone. I was bitter at everybody, and I didn’t feel like that was the life that I wanted to live.”

Amber also talks about just how bad her addiction had gotten. “I had taken 30 Suboxone within about three days,” she reveals. “You know, the depression took over, and I’d just take four or five at a time underneath my tongue.” The ABC News article reveals that Amber added “…and nod out. I had more than addiction problems. I had, you know, mental problems, too.”

And what about her relationship with Leah’s father Gary Shirley? “We’ll still have a relationship,” she says, “and we still do.”

Amber also points out that her time in jail won’t be wasted, telling Chang, “I’m not just gonna sit, I’m gonna do substance abuse classes, I’m gonna get my GED.”

Here is more from the interview not included in the video clip, including he role being on Teen Mom played in her winding up in the situation she’s in: “Getting money at a young age, going to parties where drugs were given to you, that’s what really got me. … You make your own choices,” she said. Amber also mentioned that the stress of being in the public eye also contributed. “It’s like every time you go out to eat, you know, people are staring at you, talking, and it’s hard,” she said. “You get paranoid … It’s not normal, to always be paranoid.”

And that paranoia didn’t seem to go away while in rehab. “In my situation, I felt in the program there were a lot of eyes on me. And it was very uncomfortable. I was not using my anti-psych medication even,” she said. “You know, I was very depressed, all alone, all bitter at everybody. I felt like that wasn’t the life I wanted to live, I felt like I’d rather do my time, and get it over with, and make the best out of the situation that’s been handed to me.”

“I felt like I had no reason to even be around,” she said about losing custody of her daughter Leah to Gary, “because I was a mom. I felt like that’s what I was put on this earth to do, when I had her … and I started partying and doing drugs because I felt like I couldn’t do anything anymore. I lost my whole family, I felt like, they moved away from me,” she said.

“I lived such a busy life and I woke up sometimes and was like, am I too busy for my family? And I felt so selfish. I was so depressed. It became kind of scary for me,” she said. “I felt the same way I felt a couple years back when I, you know, tried to commit suicide. When I walked in a courtroom, I was like, if I don’t do something, I’m going to have to.” 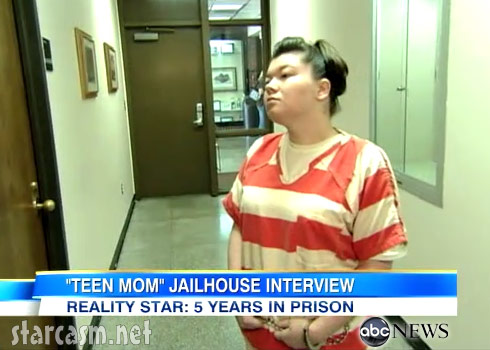 Of deciding not to return to the drug program, Amber further explained, “It wasn’t just the program, it was the fact of being alone. It was personal. You know being alone, feeling like you’re hopeless, you have nothing, feeling like an addict and you’re never going to change, even though in your mind you’re working so hard but every time you get to court it’s not good enough.”

“I had been at such a low point, I couldn’t go any lower,” she said. “There’s nothing lower than trying to kill yourself. That’s why it’s probably hard to understand why I did what I did.

Amber also elaborated on some of the positive things she hopes to accomplish while serving time. “I’m going to take some classes, I’m going to get my GED, take as many programs as I can. You know, just try to better myself for when I do get out and not stay in prison … I’ll be off the drugs, I’ll have an education to get me a job, you have to think of the positives in this negative story,” she added.

It’s hard to find much of a silver lining in this dark cloud, but at least Amber did appear to be calm and lucid. Perhaps the time behind bars, without access to drugs or the stress and drama of being a mom and dealing with Gary, will be enough to right the ship for her. At this point, only time will tell.