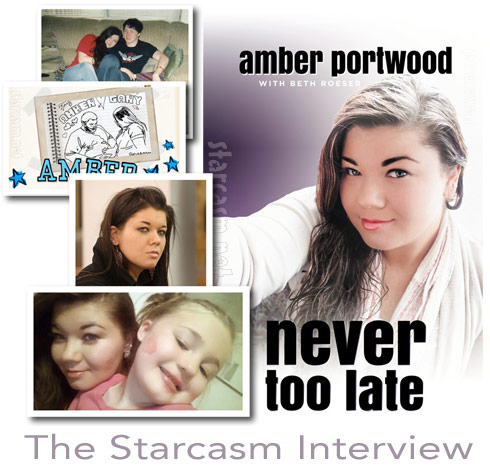 When Teen Mom ended its first run in Fall 2012, Amber Portwood was known as the show’s bad girl. In the two years since, Amber completed a term in prison, emerged as a transformed woman and is now on a mission to help others with her memoir, Never Too Late.

“I’ve been determined to just use my story of my life to help others in the same situation and give people hope,” Amber, now 24, told Starcasm in a new interview. “I just want to let people know that it is never too late.”

In her personal life, the “never too late” motto applies to the relationship she’s developed with 5-year-old Leah.

“She says cute little things like the other day when she did her walk with heels on, she was like, ‘I’m a lady like Mommy,’” Amber said of her daughter. “I just thought it was so adorable because I’m happy that she looks up to me now.”

Amber explained that even though she doesn’t have custody of Leah, Gary Shirley allows her to see their daughter any time. She attributed that impressively smooth co-parenting relationship to the fact the ex-fiances only talk about Leah.

“We don’t really argue anymore because we don’t have that personal relationship anymore,” Amber said, adding that’s “a good thing.”

Besides, moving on from Gary has enabled Amber to connect with a new man.

“I have been talking specifically to one person and I really do feel like I love him, but we’re not together. We’re taking things really slow,” Amber said, explaining she’s working to overcome the trust issues caused by ex-boyfriends who sold stories about her to the press. “I have to get myself back in gear and tell myself, ‘Ok, I can trust men, I just have to not be naive.’ That’s a problem that I have because I’m very naive when it comes to love… I do believe that I trust this man. I hope that I can trust him.”

Another big part of her life that Amber approached with apprehension was the idea of doing a new season of Teen Mom.

“I had a bunch of mixed feelings because I personally wanted to make sure that I was strong enough to handle the life again… I believe that I am strong enough to and I’m ready and willing to share the way that my life is now with fans,” Amber said. “The main thing that I think helped me say yes to this show is I kind of thought, ‘You know, you wrote this book. You wanted to help people. You want to reach out to as many people as you can, so why wouldn’t you do this?’”

Beyond sharing her message on MTV, Amber revealed she is working on founding her own rehabilitation centers and hopes to have them up and running by the time she turns 30.