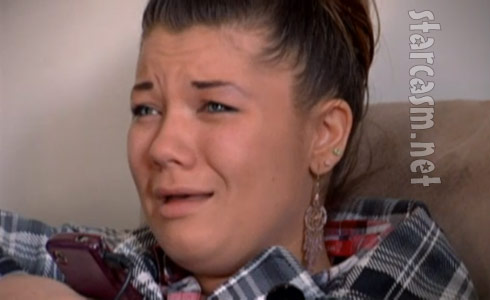 In a discussion with HollyBaby Teen Mom Amber Portwood riffed on the reality behind reality TV violence, singling out the popular new show Mob Wives. In the process she dropped a TM Season 3 spoiler by revealing that viewers will be provided background info as to why her infamous slap down of baby-daddy Gary Shirley happened!

If you’ve been out of the loop the televised slapping of “It’s Gary Time” caught the attention of Indiana authorities because the violent confrontation took place in front of their daughter Leah. A legal mess ensued that has recently been resolved and has resulted in a two-year-probation sentence among other court requirements (to catch up with Amber’s legal sitch click here).

Amber gets pretty revealing in discussing Mob Wives and how, “The truth is not always going to be out there. There’s always going to be stuff that is behind the scenes that 90% of the time nobody will ever know.” She doesn’t condone the show’s violence (which is frequent and hard-core just like the M-dubs Carla, Karen, Drita and Renee) but still remains a big fan. She goes on to add that she’s glad there’s actually another show out there like Teen Mom that in her opinion keeps it real.

Slipped in with all this Mob Wives talk was actually a big spoiler for the upcoming 3rd Season of Teen Mom. The official trailer highlights the struggles between Amber and Gary in regards to their legal situations but in this interview Amber flat out stated that:

“That’s what happened with me and Gary Shirley when I hit him. There was a major issue between me and Gary, which is the reason why I got physical with him — which will come out this season (in Teen Mom by the way).”

Man as if we needed more reason to be stoked for the fast approaching July 5th premiere! How the situation escalated to the infamous smackin’ should be compelling and perhaps shed a new light on the oft maligned Portwood.