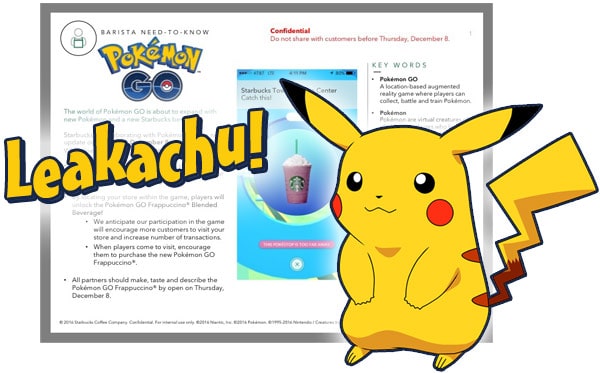 If you’re one of the millions of folks trying to “catch ’em all” with the record-breaking geolocation mobile app Pokemon Go, then your task may soon be getting more difficult as a new “leaked” corporate Starbucks photo appears to verify earlier evidence that the coffee company is partnering with Pokemon Go creator Niantic Labs to promote the introduction of new Pokemon to the game later this week!

In case you missed it, there was a “leaked” email that surfaced online last month that referenced the “launch of Pokeman Version 2” on December 7. Most folks assumed that “Version 2” was in reference to the highly-anticipated introduction of Pokemon Generation 2 into the game, which consists of 100 new monsters.

Since that time, there has been no confirmation of the validity or invalidity of the leaked email — until today. 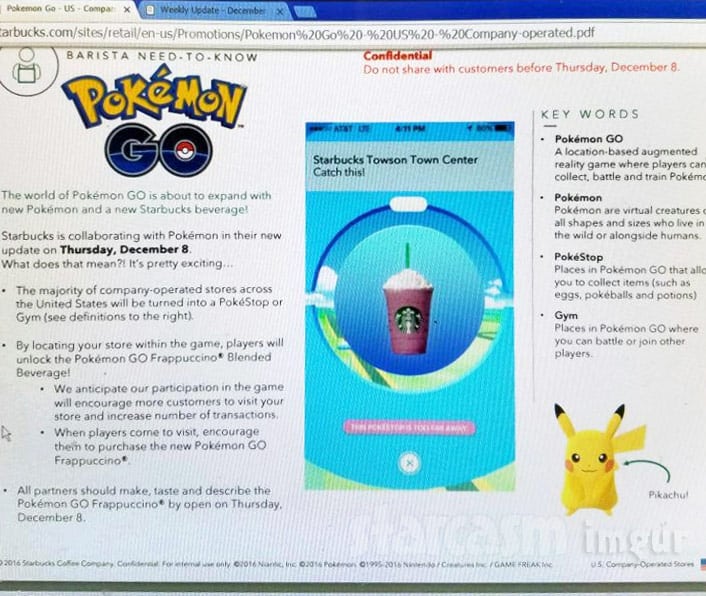 A redditor shared a photo (above) of a computer accessing the Starbuck’s corporate promotions page that clearly references a Pokemon Go promotion starting this week. “This is more evidence that Starbucks is planning on a HUGE Pokemon update,” wrote alturrisi. The redditor added that the photo was “leaked off of their official employee’s upcoming promotions web page, today.”

Alturrisi goes on to reveal that it was actually a friend who worked at the coffee chain who had accessed the employee-only info. “This was taken from someone I know who works for Starbucks and has been keeping tabs on whats going on for me.”

Here’s the text of the website, which is a PDF file with what appears to be a legitimate url:

The world of Pokemon GO is about to expand with new Pokemon and a new Starbucks beverage!

Starbucks is collaborating with Pokemon in their new update on Thursday, December 8

What does that mean? It’s pretty exciting…

• By locating your store within the game, players will unlock the Pokemon GO Frappuccino Blended Beverage!

• We anticipate our participation in the game will encourage more customers to visit your store and increase number of transactions.

• When players come to visit, encourage them to purchase the new Pokemon GO Frappuccino

• All partners should make, taste and describe the Pokemon Go Frappuccino by open on Thursday, December 8.

UPDATE – This photo just turned up on Twitter that looks like someone in a Starbucks backroom printed out the PDF file! 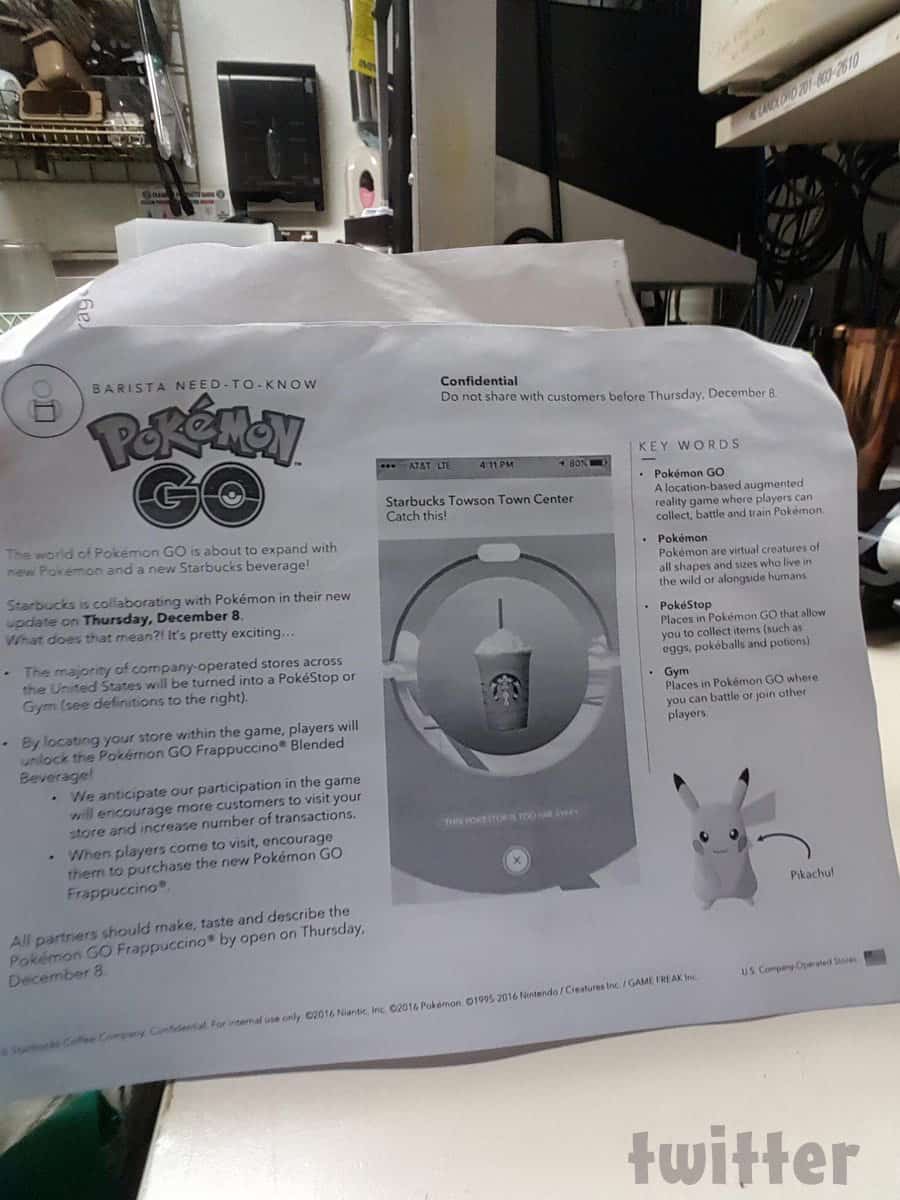 UPDATE – And this next photo pretty much confirms it! It includes the Pokemon Go Frappuccino recipe and a Q&A section for Starbucks employees:

I should point out that there is only mention of a single Pokemon Go themed Starbucks drink, and that it appears to be purple colored. This could mean (if you are so inclined to poo poo on everyone’s excitement) that the promotion is merely to celebrate the introduction of Ditto into the game, which happened during Niantic’s Thanksgiving holiday event.

However, the wording in the PDF file indicates the new Pokemon have yet to be added, and suggests multiple new Pokemon instead of just one. There is still the potential for buzzkill, however, as the game has yet to introduce the “Legendaries” from Generation 1 yet. But, if that’s the case, then it isn’t that big of a buzzkill as players will FINALLY be able to get their balls around Zapdos, Articuno, Moltres, Mew and Mewtwo!

An executive from reddit’s Pokemon Go subreddit The Silph Road shared the new evidence and put together this description — which is the perfect mixture of caution and excitement:

A few things to note here:

1. Credible?: This leak is still not confirmed.

2. New Pokemon: Remember, the client-side code for the next 100 species is already in the app. Niantic is able to roll out a new GAME_MASTER from the server side, which will bequeath movesets and official base stats. Hypothetically, that is all that is required, should the next 100 species pull entirely from the existing in-game moves.

3. Potential client update: It’s possible a new client-side app update may occur between now and when Starbucks opens in the morning (EST) on Dec 8th, but it would have to begin rolling out very soon (most likely tomorrow).

4. Increasing PokeStops: This may also be a way to roll out new PokeStops and Gyms (always a good thing)! And having coffee shop gyms will likely help cold-weather players have a more enjoyable gym scene.

5. End Date?: The lack of end date leaves this alleged promotion ambiguous. It could last 1 day, a month, or an arbitrary amount of time (a week, etc). It wouldn’t be unrealistic in our view for the promotion to last through the holidays.

Take it all with a grain of salt until we see the marketing efforts from either Niantic or Starbucks, travelers. But if this is real, this week could be a blast. 🙂 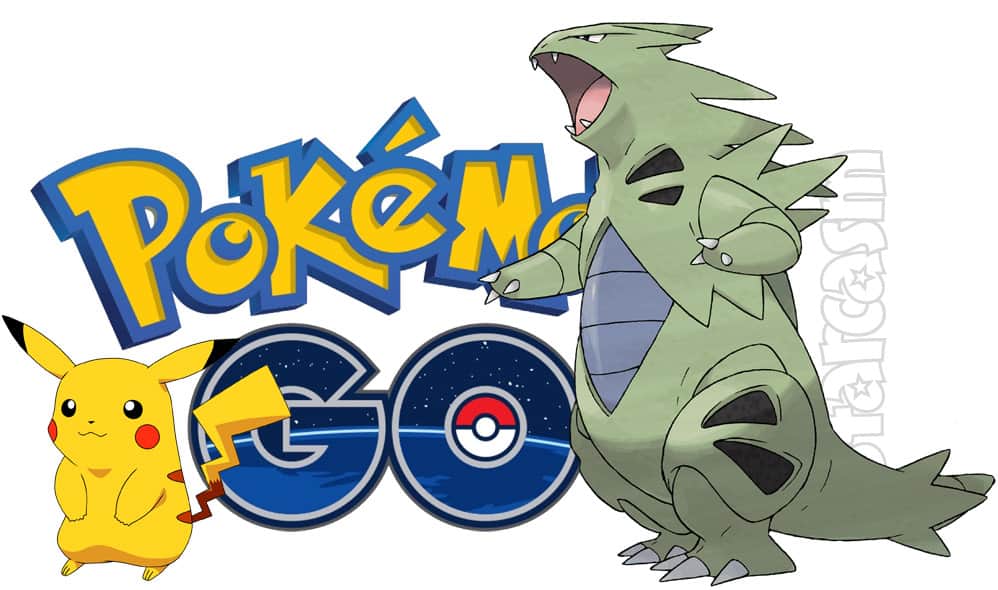 Some commenters doubted that Niantic would introduce Generation 2 (which would be the biggest event in the game — by far — since it’s launch in July) without some sort of advance notice to promote it. But, other commenters pointed out that has been the company’s m.o. so far. With the introduction of Ditto, for example, they waited until people started posting online about catching the shape-shifting ‘mon before confirming Ditto was added the game in an official statement.

As an avid player, I confess that it would be WAAYYYY more exciting to just wake up Thursday morning and check my account only to find a brand new Generation 2 Pokemon sitting in my room! And, of course, with all these millions of players, the word would spread like wildfire — no promotion needed!

Anyways… If the Starbucks and Pokemon Go promotion is happening, which most everyone now believes that it is, then trainers can at least look forward to lots of new gyms and Pokestops!! And as mentioned above, they will all be Starbucks locations where you can enjoy a hot drink as winter sets in.

UPDATE – Niantic Labs has reportedly just made some changes to Pokemon Go! It’s unclear at this time what these changes are, but we should know soon enough if it is the gate opening on Generation 2.