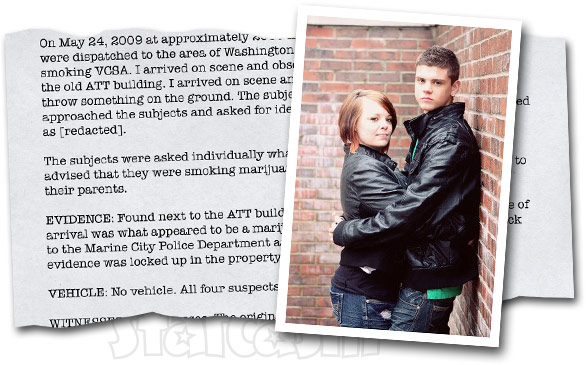 On this season of Teen Mom OG viewers have seen Catelynn Lowell’s struggle to quit marijuana, a drug that she and husband Tyler Baltierra have openly admitted to using often — actually, very often. As we first reported back in 2013, both Tyler and Catelynn have used pot since at least 2009 when they were both arrested for marijuana possession just one week after Catelynn gave birth to their daughter Carly.

At the time of our initial report, not much mush known about the details of the arrest, merely that they pleaded guilty and each had to pay $253 in fines and court fees. Now, thanks to Radar Online publishing the original police report from the incident earlier today, we have more information about what happened.

In addition to Tyler and Catelynn, the police report indicates that two other unidentified juveniles were also arrested. Here is the arresting officer’s account of what happened with some information redacted, including summaries of the interviews he conducted with each of the four juveniles present. You will notice that one female says she gave birth just two weeks prior. It is assumed that female is Catelynn, although she actually gave birth to her daughter Carly exactly one week prior on May 17.

On May 24, 2009 at approximately 2030 hours, I Officer Mohr and Officer Clark were dispatched to the area of Washington St. and Market St. for juveniles smoking VCSA. I arrived on scene and observed four juveniles standing behind the old ATT building. I arrived on scene and observed one of the male subjects throw something on the ground. The subjects then began to walk away. I approached the subjects and asked for identification. The subjects were identified as [redacted].

EVIDENCE: Found next to the ATT building where all the kids were at the time of arrival was what appeared to be a marijuana blunt. The blunt was brought back to the Marine City Police Department and tested positive for marijuana. The evidence was locked up in the property room by Officer Clark.

VEHICLE: No vehicle. All four suspects were on foot.

WITNESSES: No witnesses. The original complainant did not want to be identified. 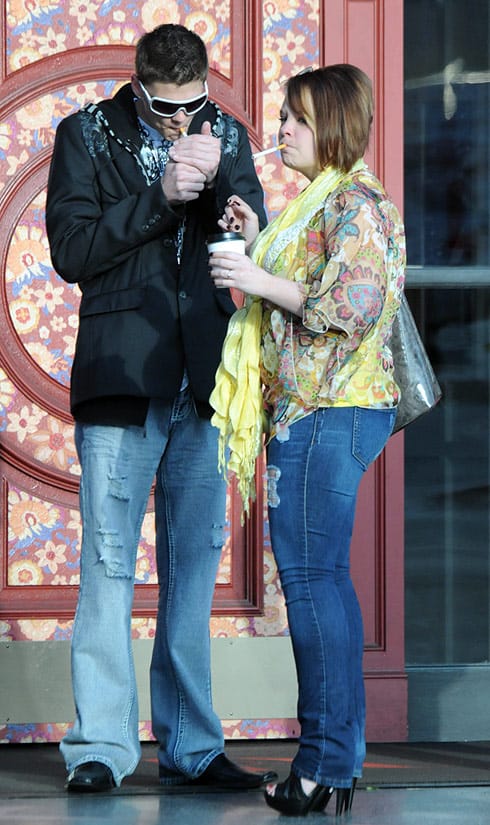 INTERVIEW 1: I asked [redacted] to advise me what had transpired tonight. [redacted] advised me that before the Marine City Police showed up that she and [redacted] were passing around the marijuana blunt and taking hits off of it. [redacted] was released to her mother, [redacted].

Radar Online reports that Catelynn and Tyler were each sentenced to 20 days in jail, but that those sentences were suspended indefinitely after the fines were paid.

As many Teen Mom fans are well aware, there was never any mention of the arrest in Catelynn’s episode of 16 and Pregnant, despite it occurring during the time period that MTV was filming the show. It is our understanding that the arrest might have jeopardized the couple’s open adoption arrangement with Brandon and Teresa and that may have impacted either MTV’s decision to mention the arrests, or Catelynn and Tyler’s decision to not let MTV even know about the arrests.

Despite the seven-year-old police report being uncovered, we still don’t have either a Catelynn Baltierra or Tyler Baltierra mug shot photo. I’m not sure if that’s because they were never officially booked, or because they were juveniles at the time.