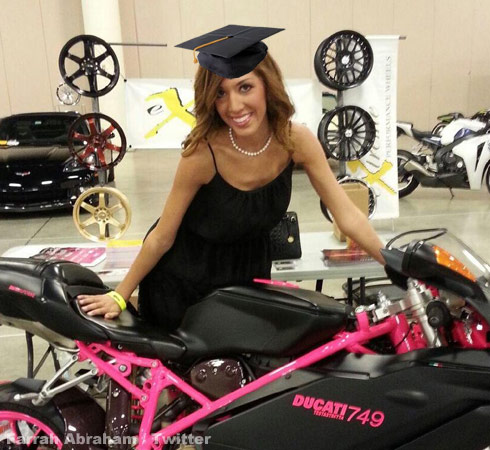 “I’m going back to further my education,” Farrah tells TMZ. “It helps my future in terms of my business goals and secures a better future for my daughter.”

Although Farrah seems to be making the most of her $1.5 million sex tape sale, many still think that she never should have taken that route. Dr. Drew recently stated:

”If she would have called me for advice, I would have told her not to do this. But she is not my patient, she is not my kid. Farrah is making horrible, horrible choices. Let’s say she takes that $2 million and opens a restaurant, which has always been her dream, how are you going to talk a 21, 22-year-old out of that? I just don’t know.”

Wendy Williams slammed Farrah for selling her sex tape because of what it will do to her daughter in the future but said that she could redeem herself with an education and smart business decisions. “The only way she can redeem herself is to really use the money to get her education, hopefully someplace good, and then get her masters and become something out in the workforce that we can say, ‘Wow, look at Teen Mom.’ If she becomes a nuclear physicist, we can say, ‘Okay, Teen Mom did the damn thing.’ That is the only way she can redeem herself.”

What do you think? Is Farrah on her way to making this whole sex tape escapade worth her while? Or is the damage it will do to Sophia simply not worth the risk?