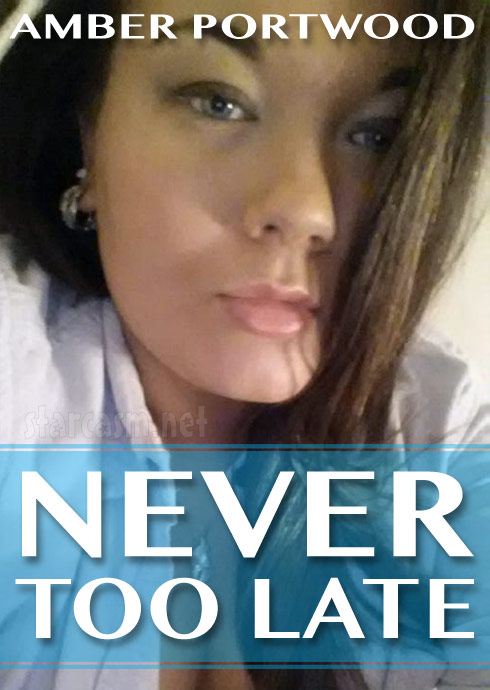 Earlier this month former Teen Mom star Amber Portwood announced she would be releasing a tell-all book titled Never Too Late, which she described at the time as “a brutally honest account of how bad my life got.” Today NBTV Studios and publisher Post Hill Press issued a press release with more information about the book, including a release date and the first excerpts!

[No, that’s not the real book cover above, just something we whipped up in Photoshop with a great Amber Twitter pic.]

“When Amber Portwood debuted on MTV’s hit documentary series 16 and Pregnant,” the release reads, “no one could have predicted that the teenager from Anderson, Indiana with the dry sense of humor would go on to become one of the most controversial young celebrities in reality TV history. But soon after Amber gave birth to her daughter, her life spiraled into chaos.”

Here’s an excerpt from Never Too Late:

Addiction. Mental illness. Death. Divorce. Betrayal. Violence. Suicide attempts. Felony charges. Rehab. Drug overdoses. Jail. Oh yeah, and there’s some sex and rock ‘n’ roll in there, too. But I’m going to tell you how it all happened. Maybe when I’m done you’ll understand some of the weirder parts of the story, like the reason I walked away from my daughter to voluntarily serve time in prison.

Amber Portwood’s story really is an amazing one, and a seemingly rare instance of a “reality star gone bad” story with a happy ending. And Amber’s reason for writing it isn’t to promote herself, but to help others according to this tweet from yesterday:

My book is to help others I've had a book deal for years and haven't used it because I felt there was no purpose..but now there is..love♡

The press release goes on to describe Never Too Late as “the real story of how the young mother learned to deal with the demons that nearly destroyed her, leaving readers with a powerful message that no matter how far down a person might fall, it’s never too late to get back up and change the future.”

What makes me completely fulfilled is the love I have with Leah and the emotions I feel when I’m with her. She’s really holding onto me, and I’m holding onto her too. It makes me feel like everything is worth something. Leah reminds me every day not just of my responsibilities as a parent and a person, but of the joy I’m capable of feeling. For the first time in my life, I see the point in everything. I finally believe I can be happy.

There will also be a website launch in conjunction with the book. www.nevertoolate.me is currently up, but under construction. It looks to be a positive, inspirational site divided thematically into Mind, Body, Self, Passion and Parenting.

Never Too Late is scheduled for release on August 26, 2014, but you can already pre-order your copy from Amazon now: