Former Teen Mom star Farrah Abraham seemed a bit unprepared for what was in store when she sat down with Youtube personality Shane Dawson (as his famously ridiculous character Shananay on The Shanany Show) for an interview promoting her book My Teenage Dream Ended. The result will most certainly be inducted into the Cringeworthy Hall of Fame.

I think Shane summed up the clip pretty well after the interview when he said, “Well, that was the most awkward video in the entire world. You know, sometimes you just never know how a celebrity’s gonna react to Shananay. Sometime’s they get the joke, and sometimes they don’t. And sometimes you have the most uncomfortable interaction with a person you’ve ever f***ing had! Either way, hopefully it was fun to watch, and hopefully Farrah doesn’t come to my house in the middle of the night and murder me in my sleep.” 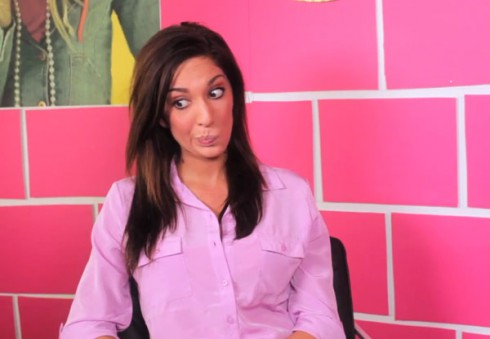 I’m thinking whoever does booking for Farrah should take the blame on this one for not properly preparing her for what was in store. (Of course, I suppose it’s quite likely Farrah handles her own booking. So…) How could they have not seen this Shane Dawson clip from early September in which he and his friends rail on Farrah, her website, her book, and her pasta sauce!