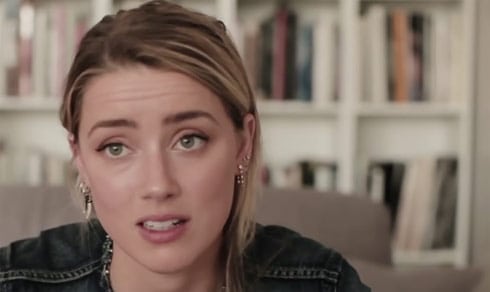 Actress Amber Heard recorded an emotional PSA about domestic violence which was shared on Friday as part of the #GirlGaze Project.

It’s been over 3 months since Heard reached a divorce settlement agreement with Johnny Depp. She first filed for divorce in May, claiming that Depp was both physically and emotionally abusive on multiple occasions during their tumultuous 4-year relationship.

Heard, who filed a domestic violence restraining order against Depp that she later withdrew, says in the 2-minute clip, “How is this happening to me? I’m strong. I’m smart. I’m not a victim… There is a lot of shame attached to that label of victim. It happens to so many women. When it happens to you behind closed doors, with someone you love, it’s not that straightforward. If a stranger did this … it would be a no-brainer.”

Amber’s voice breaks as she adds, “Just as a woman who has gone through this in the public stage, I have a unique opportunity to remind other women not only that this doesn’t have to be the way it is, you don’t have to do it alone. You’re not alone.”

Heard and Depp settled in August, with Depp agreeing to pay Heard around 7 million dollars.

PHOTOS Johnny Depp and Penelope Cruz at Pirates of the Caribbean 4: On Stranger Tides Premiere

A brief history of celebrities saying fame is ‘like rape’