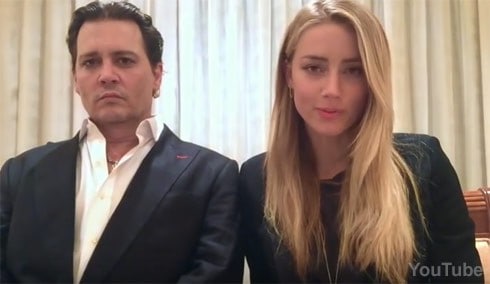 Actress Amber Heard has filed for divorce from actor Johnny Depp after 15 months of marriage.

Heard filed the petition Monday, just 3 days after Depp’s mother passed away. She cited irreconcilable differences in the paperwork. Amber has requested spousal support as part of the petition.

Sources indicate the pair had no prenup. Depp responded, via a filing by his lawyer, and asked that the judge reject Heard’s request for spousal support…

Since the news broke there’s been a cavalcade of speculative reports citing sources close to the stars in regard to the deets behind what could be an acrimonious split.

The big problem was how much Depp’s family disliked Amber. “Johnny’s 2 teenage kids, his 2 sisters and his mom “hated” Amber, and openly discussed it.  We’re told they talked about how Amber would rail on Johnny and ‘treat him like crap.'”

Johnny, who has been very public about his close-knit relationship with his late mother Betty Sue, moved her in to he and Amber’s home and this is said to have broken bad. Betty Sue was not a fan of Heard and accused of her of using Depp’s fame to boost her own career.

People posted a back story reflecting Heard’s cold feet about marrying Depp. “Before Amber met Johnny she was just a regular super cool hipster chick living with roommates who dated girls. At their engagement party she kind of got cold feet… she was just like what is this scene and what am I doing here? She kind of couldn’t believe it was her life now.”

E! News broke down what they viewed as warning signs that their relationship might have been headed for trouble. “As we’ve pointed out, both Depp and Heard were seen on numerous occasions separately, but the last time these two stepped out together was in April, and their outing was to appear in court for their Australian dog case.”