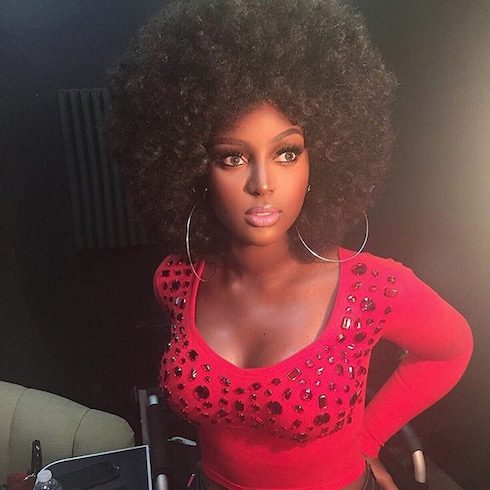 Amara La Negra’s real hair has become one of the focal points of the season for LHHMiami’s breakout star. Thanks to racist controversies, the 27-year-old has had to explain her unique, breathtaking look for a whole new audience — but it seems like that audience is listening.

Thanks to an unfortunate premiere episode conversation with fellow Love & Hip Hop Miami cast member Young Hollywood, Amara La Negra’s real hair is now just as well-known as the woman who wears it. As we’ve written before, Amara has always refused to change her look to meet the perceived expectations of an audience. And now that she’s using her platform on LHHMiami to attempt an English-language crossover — during a moment when racial tensions are particularly heated in America — there’s no reason to expect that her attitude would change at all.

In fact, as the Afro-Dominican entertainer has explained before, she wears her hair the way she does in order to rep for Latinas who look like her but who are underrepresented in entertainment. “Being an Afro-Latina in the Latin market is particularly difficult,” Amara has said, “because you essentially have to work twice as hard to prove yourself. As much as people want to say that racism is over and it doesn’t exist, it does, especially in the Latin market. When they talk about a Latina, they talk about Sofia Vergara or Jennifer Lopez, Shakira even. But not anyone who looks like me, and I’m 100 percent Latina.”

( AMARA LA NEGRA SIGNS A MULTI MILLION DOLLAR CONTRACT WITH BMG) Hard Work Pays Off! Don’t Let Anyone Put you down! Work hard for what you want because it won’t come to you without a fight. You have to be strong and courageous and know that you can do anything you put your mind to. If somebody puts you down or criticizes you, just keep believing in yourself and turn it into something positive. Thanks to all my fans for all the love and support because you guys are part of my success!!! I want to Thank my Mom @mamianalamama1 for always being there for me @jullianboothe My manager/ Brother/ Friend Thank you sooo much for believing in me from day 1. You and Mami are my Ride or Die! And @thezachkatz The President of BMG thank you for seeing the vision and wanting to be part of my Dream. Thanks to my attorney @mattbuseresq @meccamalone

Amara La Negra’s real hair has also come up in two new, high-profile interviews, both of which ran in the aftermath of Amara’s Love & Hip Hop Miami debut. Speaking to Us, Amara explained that of course Young Hollywood “was not the first person to speak to [her] like that,” but that she was surprised to discover *he* didn’t appear to be playing his attitude up for the cameras:

Every single word that came out of Young Hollywood’s mouth, he really meant. Even when I saw him outside of scenes, I was like, ‘Dude, what was that about? Did you really mean that?’ He was like, ‘Yeah, what’s the problem?’….My hair is mine. I do have a natural Afro. I embrace it. I love it,” she says. “I do enhance it by wearing extensions because it’s hard for maintenance to have a perfect Afro 24/7, but I did decide to still rock my ‘fro because it’s the style that I feel that’s closer to representing who I am.

Additionally, Amara told OK! that she believes her hair is merely representative of the bigger issue facing people — specifically women — who look like her. Because beauty standards are so common, and thus so hard to change or erase, she feels it’s important for her to introduce a new standard:

It’s not about my hair. I could go bald tomorrow and the issue will still remain, because this has been something that has happened for years, and unfortunately nobody ever really spoken about it. Afro-Latinas and I in general don’t have a movement. We don’t have a Martin Luther King Jr., or a Malcolm X, or a Black Lives Matter movement. We don’t have people who are fighting for our place. And I’m sick of us feeling like we’re ignored because nobody says anything. We just take it. And I don’t think it should be like that.

Fortunately, Amara’s relentless positivity appears to be paying off. The social media commentary on her beef with Young Hollywood appears to be on Amara’s side. Several days after LHHMiami’s premiere, Amara signed a multi-album recording contract. And she knows her legions of old-school fans have her back:

Getting struck by lightning may result in Lichtenberg figures, the most beautiful scar ever