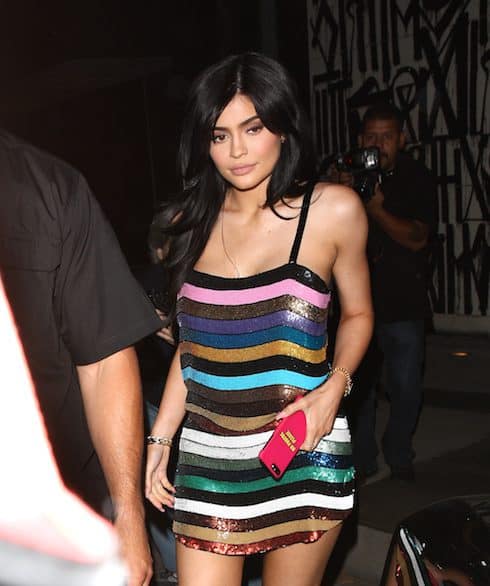 When is Kylie Jenner’s baby due? Originally, the gossip following bombshell reports of the 20-year-old’s pregnancy suggested she’d gotten pregnant in June of 2017, and would likely give birth sometime the following March. However, that timeline was quickly muddled by conflicting rumors that Kylie Jenner and Travis Scott had actually gotten pregnant in early April, or shortly after they were first seen in public together — and that Kylie’s first baby was due to arrive very early in the new year.

Now, amid newfound speculation that Kylie may have had an abortion in secret, comes another new report on Kylie’s due date — and this one goes so far as to give an actual calendar day. OK is claiming Kylie Jenner’s baby due on February 4th has she and Travis both excited.

“Kylie is having a lot of fun picking out items for her baby,” said the alleged insider that OK quoted. Of Kylie’s third trimester, the source added “She’s definitely leaning towards pink hues and having fun with the fact that she’s having a girl.” (Devoteés will recall that Kylie and Kim Kardashian both had pink-themed baby showers over the same weekend this past November, though Kylie apparently hated hers.)

In related gossip, news that Kylie Jenner and Travis Scott are once again on the rocks appears to have once again been debunked, this time from the busy people over at Gossip Cop. Their latest pushback says that reports the two weren’t together at the Kardashian Christmas party are flat-out wrong, pointing out that recently published photos show them side-by-side in the photobooth at the party.

Plus, rumors that Kylie and Travis actually got engaged in secret two months ago — which Kylie fueled by flaunting a huge diamond ring on Snapchat — have yet to be either confirmed by the Kardashians or debunked by a reputable site.

Regardless of news about Kylie Jenner’s baby due a mere five weeks from now, the video of Kylie appearing to cradle her baby bump while dancing that’s been making the rounds has also been debunked. The grainy footage depicts Kylie on the dance floor in a shiny, curve-accentuating white dress, but was actually filmed at a Golden Globes afterparty in January of 2017. Though, given Kylie’s propensity for dropping flattering footage of herself in fans’ laps as a way to distract from the fact that she’s yet to share a baby bump pic, you can understand how the clip went viral in the first place.

LHH Hollywood: Are Soulja Boy and Nia Riley together? He insults her vagina for all the world to see