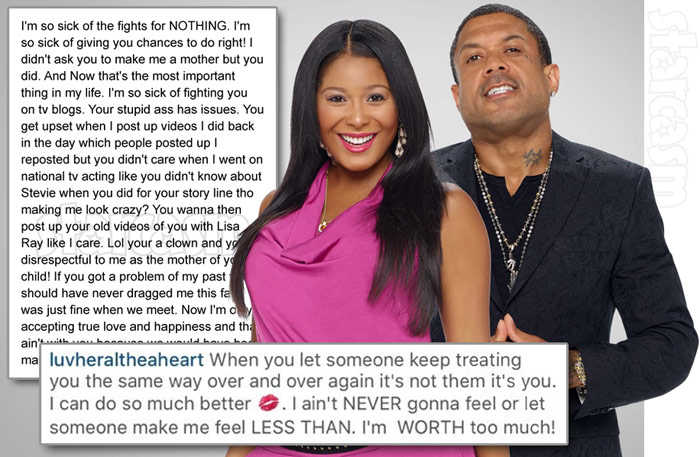 So much for all that time in Marriage Boot Camp and that dramatic proposal on the season finale because it appears that tumultuous Love and Hip Hop: Atlanta couple Althea Heart and Benzino are beendunzo yet again.

The most recent very public blow up comes courtesy of Althea, who called out ‘Zino in a lengthy Instagram message in which she calls him a “stupid ass” and a “clown” who is “disrespectful to me as the mother of your child!” Here’s the full message posted by Althea in a text graphic followed by her caption:

I’m so sick of the fights for NOTHING. I’m so sick of giving you chances to do right! I didn’t ask you to make me a mother but you did. And Now that’s the most important thing in my life. I’m so sick of fighting you on tv blogs. Your stupid ass has issues. You get upset when I post up videos I did back in the day which people posted up I reposted but you didn’t care when I went on national tv acting like you didn’t know about Stevie when you did for your story line tho making me look crazy? You wanna then post up your old videos of you with Lisa Ray like I care. Lol your a clown and your disrespectful to me as the mother of your child! If you got a problem of my past you should have never dragged me this far. I was just fine when we meet. Now I’m only accepting true love and happiness and that ain’t with you because we would have been married. But thank god we not! Over it!

When you let someone keep treating you the same way over and over again it’s not them it’s you. I can do so much better ?‍. I ain’t NEVER gonna feel or let someone make me feel LESS THAN. I’m WORTH too much!

If you are for some reason really pulling for Althenzino, then I suppose you might could be optimistic about the fact that Althea has since deleted the post. Also, It appears as though Benzino has deleted the Instagram video mentioned by Althea which he described this way on Twitter:

I've done a lot of videos with a lot of women but NONE OF THEM COMPARE TO THIS BEAUTIFUL WOMAN… https://t.co/FrvoLkMYaA

What a mess. I suppose we should all anticipate an announcement soon that Althea and Benzino will be appearing on Couples Therapy With Dr. Jenn. Drama ain’t drama unless everyone can see it! Stay tuned.