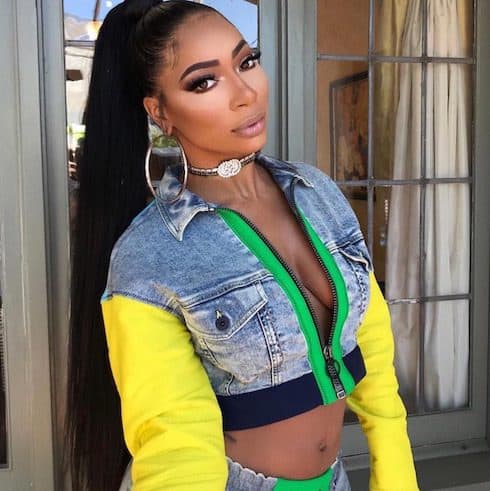 She just got arrested for the 22nd time that we know of — but was Tommie kicked off Love & Hip Hop Atlanta, or will she get to keep her job? The controversial figure has been the subject of firing rumors before. This time, though, the seriousness of the charges means Tommie is facing a new level of scrutiny.

Last week, Tommie triggered a mess of head-shaking after getting arrested twice in a 24-hour span. The first time came after she assaulted a middle-schooler — allegedly her 14-yea-old daughter Samaria, though police have yet to confirm the victim’s identity. Tommie is said to have slammed the girl’s head into a locker, then dragged her through the halls by her hair while shouting obscenities.

The next day, Tommie was arrested again, this time for stalking after violating a judge’s order to stay away from the victim. Tommie was also arrested on obstruction charges: she hid in the attic of her home when Cobb County police arrived to arrest her on the stalking charge. (Tommie’s mug shot from the second arrest is on the right side of the image at the top of the article; her mug shot from the middle school attack is on the left.)

Now, a new report from The Jasmine Brand suggests that Tommie’s time on LHHATL may be coming to a close. Per their anonymous source, “there is concern from Love & Hip Hop Atlanta‘s producers and VH1 over [Tommie’s] most recent arrest.”

TJB’s source explained, “Tommie has gotten in trouble before, but child cruelty allegations are a sensitive subject. [The producers] don’t want it to appear like they’re condoning her behavior.”

It’s true that, from a PR standpoint, anything to do with child cruelty is worse than the the legal troubles Tommie has dealt with since she debuted on the show during LHHATL Season 5. Tommie already had a long rap sheet before making her debut; since then, she’s been arrested on a number of assault and DUI charges, as well as a smattering of others.

But it’s also worth pointing out that Tommie has allegedly been in this position before. Back in April of 2017, as filming for LHHATL Season 6 was coming to a close, Tommie was said to have been fired for “fighting too much.” And a month later, the gossip was that Tommie had quit the show after being “exposed” in a lengthy monologue / rant by her former mentor Karen King.

In short, it seems possible that Tommie will weather this storm, as she has so many others. Love & Hip Hop Atlanta has shown viewers more of Tommie’s family and home life in recent seasons; if it turns out the victim of Tommie’s middle school beating was in fact her daughter, the show will try to highlight their relationship and depict what went so wrong for Tommie.

In either case, we wish her the best and hope she gets the help she clearly needs.