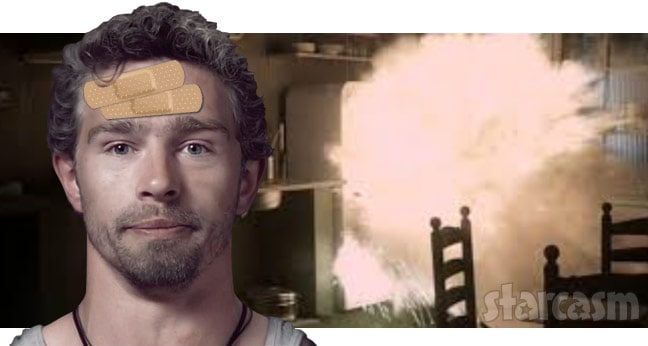 Rumors have been swirling all week that Alaskan Bush People star Matt Brown was seriously injured after some sort of explosion, and it has since been confirmed that he was hospitalized after a Mason jar full of gunpowder stored in a refrigerator blew up.

Early reports indicated that Matt was in ICU after an incident involving a third of a stick of dynamite, but TMZ has since revealed the true cause of the accident: “Apparently, he’d filled a mason jar with gunpowder and cannon fuse, and stored it in his fridge,” the site reports.

The explosion occurred Tuesday night at Matt’s home in Hoonah, Alaska home and resulted in the reality star getting nine staples in his head. TMZ reports that Matt has since been released from the hospital — and despite earlier reports, they say Discovery cameras were not rolling at the time.

As far as why Matt had a Mason jar full of gunpowder, that remains unclear. When initial reports of Matt’s injury made their way around show fan pages and forums, it was mentioned that the explosion was from a “seal bomb.” According to TheFreeDictionary.com, a seal bomb ” a small explosive device (resembling a firecracker) that is used underwater in order to frighten mammals away from fishing grounds.” That sounds about right! Of course, I think a better name for it in this case would be a jar of Darwin Awards Tea.

All joking aside, we’re glad to hear Matt is OK.